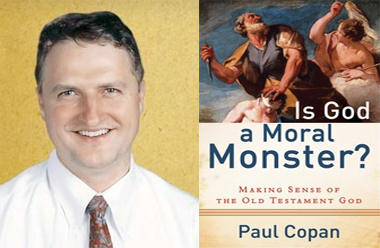 [Update: Paul Copan Speaks Out … To Vindicate Me]

So, in the first edition of my review of Copan’s book (the second edition is here), I said that I would eat my shoe if Copan could produce a single scholar who argued that Mesha sacrificed his son to Yahweh (rather than to Kemosh), because that was the position Copan was arguing against. I speculated that Copan hadn’t read any actual scholars who argued this but that he assumed that’s what some scholars were arguing. It is possible that Copan’s assumption was based on a footnote in a Randal Rauser essay with which I think Copan is familiar (since he responds to it), and in that footnote, Rauser makes the mistake of stating that some scholars argued this, a mistake because he had Niditch in mind. Niditch does not argue this. That’s how I think it went, anyway. Point is, if this is the genealogy, Copan obviously didn’t check up on Rauser’s claim.

Now, I had said that in all of my research I haven’t found anyone who argues that Mesha sacrificed to Yahweh, and that if anybody did argue it, it would be a very silly position to take. That’s what I said, and both statements are true.

So a pastor either thought it’d be fun to see me eat my shoe and went hunting for a scholar who argued this, or perhaps he just happened across a book by David Marcus. Anyway, the pastor emailed me this quote:

The omission of the phrase laYHWH may have been a deliberate act by the narrator or by a later editor to tone down the suggestion that Jephthah could indeed offer up a human sacrifice to Yahweh. Another passage where there may be an identical situation is in 2 Kings 3:27, in the oft-cited and well-known story of Mesha’s sacrificing his firstborn son. The text reads:

So he took his firstborn son, who was to succeed him as king, and offered him up on the wall as an ‘olah (wayya’alehu ‘olah ‘al hahomah).

We note that here too there is no preposition with the word ‘olah. Indeed the absence of a preposition has led to a debate as to which deity the sacrifice was made: to Chemosh, the national god of Moab, or to Yahweh. I believe that it is quite possible that here too the phrase laYHWH has been deliberately omitted because it was considered unseemly to indicate that a human sacrifice might indeed be made to Yahweh. [Arnold B.] Ehrlich has observed that the efficacy of Mesha’s sacrifice was dependent on his offering his son to Yahweh, not to Chemosh. The great wrath that came upon Israel and forced her to retreat is only explicable if the sacrifice were offered to Yahweh.

There you have it. Not one but two (Jewish) scholars take the position that I ridiculed. Of course, the scholar that Marcus cites died in 1919, and Marcus’s book is 76 pages long, does not address 2 Kings 3:27 in any real detail, is published by Texas Tech Press, and is now out of print. (There’s likely a good reason for that too, and it’s that Marcus argues that Jephthah doesn’t really sacrifice his daughter. In other words, Marcus’s treatment of the issue of human sacrifice in the Hebrew Bible has not been well received by the scholarly community.) But no matter.

Well, not exactly. Copan’s arguments against Marcus’s position still fail, and Marcus’s position is still very silly. The idea that a Moabite would sacrifice his son to a foreign god (Yahweh) rather than to his own god, is very strange, and highly unlikely. The sole basis Ehrlich has for his reading is that he cannot conceive of Kemosh besting Yahweh in battle. This is invalid. Rather, as I’ve demonstrated amply in my back-and-forth with Richard Hess on this text (see here, here, here, here, here, and especially here), it was a common practice in the region to sacrifice children to one’s own god in order to secure victory in battle. In reality, David Marcus makes no real argument that it is Yahweh to whom Mesha offers the sacrifice. He simply asserts (following an “observation” from a nineteenth century Jewish scholar) that the efficacy of Mesha’s sacrifice can only be explained if it was offered to Yahweh. This is of course nonsense. There is no precedent for such a thing, and puts Yahweh in the ridiculous (even absurd) position of turning against his own people in order to help his enemy because his enemy offered an abhorrent human sacrifice to him! This is why the position is silly, and why I was giving actual biblical scholars the benefit of the doubt that no one would advocate this. Of course, if one has the presupposition that the book of Kings is monotheistic, then one will have to distort the text in one way or another to account for this narrative. It’s just that David Marcus’s distortion is the silliest of them all. Copan was right to argue against it, but his arguments against it were, unfortunately, fallacious.

All that said, what does this mean? Does it mean that I shouldn’t have given biblical scholars the benefit of the doubt? Apparently. I’ve learned my lesson. I won’t put anything past anyone again. Does it mean that my criticisms of Copan were wrong? Absolutely not. Here’s why:

Copan’s treatment of the text was still oblivious to the primary position taken up by critical scholars: that Mesha sacrificed his son to Kemosh. Copan doesn’t even address this position in his book. This tells me that Copan hadn’t really done his homework well enough, which was the justified basis of my hyperbole. Either that, or Copan was aware of the primary critical position and just omitted reference to it intentionally. I mean, he really should have been aware of it, since it’s the position of Susan Niditch in War in the Hebrew Bible, a book whose argument he obviously and misleadingly misuses for his own ends. So he should have been aware that scholars argue that Mesha sacrificed his son to Kemosh, but for whatever reason, that position isn’t mentioned in the book.

Does it mean that any of Copan’s proposed readings of 2 Kings 3:27 are plausible? Absolutely not. My criticisms stand firm.

So what have we learned? Out of respect for biblical scholars, I made a hyperbolic statement that was justified, since it remains clear that Copan hadn’t done his homework (he omitted reference to the primary position taken up by critical scholars on this text). My statement however included the possibility that some obscure scholar might advocate for the position that Copan critiqued, but I just didn’t want to believe that anyone could seriously advocate it.

What else have we learned: Copan’s book is still dramatically deficient, and he has yet to respond in anything like a satisfactory manner, other than to try to make me look like a big meanie. So, I publicly apologized for not pulling a few of my punches, in the hopes that a more irenic tone would open up a real discussion. I had a phone conversation with Copan and he said, “You sound like a really nice guy!” (True dat.) I said, “I have a hyberbolic flair.” And he said, “Oh like Joshua!” And I laughed, but then I facepalmed. For Joshua, hyperbole is a justification for genocidal language. For Thom, hyperbole is a character flaw that justifies a sweeping dismissal of a massive amount of substantive criticism. Anyway, I invited Copan to have an irenic discussion, and he said he’d get back to me. Still waiting, months and months later.

Copan tried to sic Richard Hess on me, but that didn’t work out very well for Dr. Hess. His position on 2 Kings 3:27 has now been thoroughly discredited. Moreover, Dr. Hess claimed I misread him on a number of occasions, but as it turned out, either Dr. Hess’s writing was misleading, or my misreading of Hess was based on Copan’s own misreadings of Hess. If you read the comments at Copan’s blog, however, you’ll note that (last I checked anyway) the links to Richard Hess’s responses to me are all there, but no links to my rejoinders to Hess are anywhere to be found. That’s to be expected I suppose.

So, what do we have here? Thom eats humble pie for having too high a view of biblical scholars. Paul Copan’s book remains a travesty of scholarship. I’m sure Copan will be grateful to the pastor who emailed me the quote from Marcus, since it led to this reminder that Copan has yet to respond to the hundreds upon hundreds of substantive and damning criticisms that have been made of his book.

Once again, Copan is no doubt a very nice guy, with what he believes are good intentions. I’m not calling that into question, nor have I ever called that into question. What matters, however, is the damage he’s doing to people’s brains and to their faith in Christian leaders. Paul Copan is the Michael Bay of theology. This is truly the lowest common denominator.

[Update: Paul Copan Speaks Out … To Vindicate Me]