Michael Heiser: A Unique Species?
A commenter on Michael Heiser's blog asked him what he thought of my critique of his essay on Psalm 82 and Deuteronomy 32. Here is Heiser's response, from last night:


What do I think? Honestly, not much. Yahwism operated on a continuum. Stark and others must presume that this continuum didn’t include anything that would approximate a species-unique view of Yahweh. Good luck – maybe time travel would help. So, since we have evidence that some people *didn’t* view Yahweh as species unique that means no one did? How the heck would we know. This is just fundamentalism (no gray areas). I’m arguing that there were all sorts of positions, and that one of those is reflected by biblical writers. And that they could and did presume Yahweh was unique. What’s the big deal (I suspect I know, but I’ll leave that to readers).

This response is, to be charitable, hilarious. (This presumes Heiser was trying to be funny.) Let's break it down.

"Yahwism operated on a continuum." Agreed. 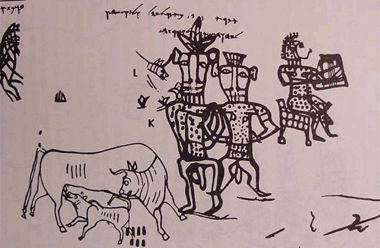 "Stark and others must presume that this continuum didn’t include anything that would approximate a species-unique view of Yahweh." This is incorrect. Stark and others make no such presumption. In fact, despite the strangeness of referring to the Judeo-Christian god as a "species," Stark and others do in fact believe that some Yahwists believed that Yahweh was a kind all to his own. It's just that we see no evidence that such a view is reflected in the Bible until at earliest the seventh century, and at latest the third century BCE. (I lean toward the seventh or sixth.) If there were evidence for "species uniqueness" in earlier texts, then Stark (at least) would love to see it. I'll discuss this more below.

"So, since we have evidence that some people *didn’t* view Yahweh as species unique that means no one did? How the heck would we know."

Precisely. We can only state what the texts tell us. So why does Heiser try to state more than the texts tell us? Why does he attribute a "species unique" view of Yahweh to texts in which that idea is not at all apparent?

"This is just fundamentalism (no gray areas)." This is just plain old fashioned posturing. Stark and others would not claim that nobody in earlier periods might have believed Yahweh was a unique class of divinity all to himself. Stark and others just see no evidence to substantiate this claim. Thus, we follow the evidence until new evidence presents itself. But Heiser isn't making a positive case from silence when he argues that early texts saw Yahweh as species unique. He's just distorting the evidence that does exist to fit his own view. What is his view? (Next sentence.)

"What’s the big deal (I suspect I know, but I’ll leave that to readers). [sic]" In other words, Heiser wants to imply that Stark and others can't abide the idea of the biblical writers having a consistent picture of Yahweh as a species unique to himself because, well, because we're liberals or something and that would threaten our happy, liberal existence, or something. He may be wise not to make clear what he "suspects he knows" about Stark and others that would explain why Stark and others can't admit something for which there is no evidence, but sometimes there is a fine line between wisdom and cowardice.

Where is the evidence in texts predating the seventh century BCE that biblical writers viewed Yahweh as a species unique? Heiser wants to point us to incomparability language. But all such language is applied to numerous gods throughout the ancient Near East, and in no case does it amount to anything like a claim for "species uniqueness." The incomparability language is applied to gods who are clearly still subordinate to other deities, higher gods, or their progenitors.

For instance, I mentioned that Shamash, while said to be without rival among the gods, is clearly subordinate to Sin, not to mention his mother Nannar. The same is true of Nanshe. Here is the text I cited in broader context:


My lady, your divine powers are mighty powers, surpassing all other divine powers; Nanshe, there are no divine powers matching your powers. An, the king, looks joyfully at you, as you sit with Enlil on the throne-dais where the fates are to be determined. Father Enki determined a fate for you. Nanshe, child born in Eridug, sweet is your praise.

Clearly Nanshe is not superior to Enlil, the king. Neither is she superior to Enki, her father, who “determined a fate” for Nanshe. In other words, Enki is the one who exalted her. She, along with Enlil, determines the fate of humankind, but her own fate is determined by a higher god, her father Enki. She reigns at the top of the second tier, but the higher gods remain in position above her.

Another example is Ishtar. The same hyperbolic language is used for her, but she is clearly subordinate to gods higher than she. Note:


I pray to thee, O Lady of ladies, goddess of goddesses.
O Ishtar, queen of all peoples, who guides mankind aright,
O Irnini ever exalted, greatest of the Igigi,
O most mighty of princesses, exalted is thy name.
Thou art indeed the light of heaven and earth,
O valiant daughter of Sin.
O supporter of arms, who determines battles,
O possessor of all divine power, who wears the crown of dominion,
O Lady, glorious is thy greatness; over all the gods it is exalted.
Anu, Enlil and Ea have made thee high; among the gods they have caused thy dominion to be great.
They have made thee high among all the Igigi; they have made thy position pre-eminent.

Once again, Ishtar is described as the greatest of all the gods, but this clearly does not include the higher gods Anu, Enlil, and Ea, who are the ones responsible for her exaltation. They established her preeminence. Clearly that her greatness is exalted “over all the gods” does not and cannot mean that it is exalted over the higher tier of deities, which would include also her father Sin.

As I stated in my original post, the language of incomparability applies to gods within one’s own tier, not to the higher gods. Thus, if Deut 32:8-9 does speak of Yahweh receiving his position from his father Elyon, then clearly 32:39 and other such statements would not be in conflict with Yahweh’s status as a subordinate to Elyon. Thus, the appeal to the incomparability language as an argument against the distinction between Yahweh and Elyon does not work.

That is why scholars like Stark and others (I say this in humor; really we should be citing Cross, Smith, Rollston, etc.) argue that there is no clear evidence for anything like "species uniqueness" until Jeremiah 10 and Isaiah 44 (seventh and sixth centuries respectively). In these texts, other national deities are ridiculed as being merely the products of human woodworkers, and not real deities at all. This may or may not be an intentionally hyperbolic polemic, but regardless, not until these texts do we get any indication that Yahweh is in a category all to himself. This kind of language does not appear in any of the earlier texts. Pointing to the standard ancient Near Eastern "incomparability" rhetoric as evidence for early species uniqueness in Israel is nothing more than special pleading.

But this is exactly the kind of special pleading Heiser warns against in "Heiser's Laws for Bible Study" (linked above). And I quote: