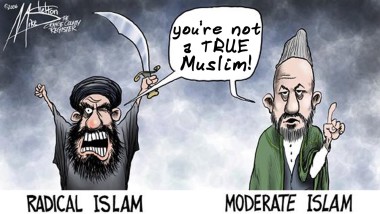 Sophomore philosophy students and internet atheists love to cry, “No True Scotsman” any time they see someone say, “Terrorists aren’t Muslim,” or “Hitler wasn’t a Christian.” This application of the No-True-Scotsman Fallacy is fallacious; it’s what I’ve long called the “No-True-Scotsman-Fallacy Fallacy.”

What this fallacy does is conflate offensive (as opposed to defensive) apologetics with natural boundary discourse. We use this kind of boundary discourse all the time, and it is perfectly legitimate, if it is properly understood.

When we say that a President who attacks the foundations of the judicial system is “unAmerican,” what we are doing is boundary discourse. We are not saying that he isn’t an American citizen, or that he doesn’t (poorly) represent Americans. We are saying that he stands in opposition to shared cultural and political values. When we say that someone’s behavior is “unAmerican,” we’re not committing the No-True-Scotsman fallacy. We’re employing a mode of discourse designed to shame and exclude proponents of unacceptable behavior from the discursive community and to encourage desired behavioral norms.

When we say that racial profiling is unAmerican, we’re not denying that America has a long tradition of racial profiling, rooted in centuries of anti-indigenous genocide, chattel slavery, and segregation. We’re saying that we don’t accept those values in our society today. So while racism is devastatingly American, we also rightly profess that it is unAmerican. This is boundary discourse. By describing certain behavior as unAmerican, we are establishing or attempting to establish a set of shared values.

The same holds true for naming certain behaviors Christian or unChristian, Islamic or unIslamic. Ultimately, we want this kind of boundary discourse to exclude bad behavior, and include good behavior.

This is a No-True-Scotsman fallacy because its intent is purely apologetic. As Bernier articulated in our Facebook discussion, this is really just a form of special pleading. Here is an example of a boundary discourse:

Imam: Islam is a religion of peace. Terrorists are not Islamic. They are not Muslim.
Philosophy Student/Internet Atheist: No True Scotsman Fallacy!
Me: Don’t be daft.

What the Imam is doing is not apologetics, and it is not special pleading. He is not saying that Islam is a religion of peace while Christianity is a religion of violence. He is not denying that the terrorists in question read the Qur’an, attend their masjed, and pray five times a day facing Mecca. He is properly setting boundaries for Muslim behavior. He is excluding these nihilists from the mainstream, acceptable practice of Islam. He is calling on resources within Islam that champion peace over violence as means of establishing or reinforcing shared values that condemn the ungodly behavior of terrorists. He’s doing this in the same way that Dr. King called on inclusive resources within the American tradition that were in contradiction to other, exclusive resources within that same tradition.

This is boundary/normative discourse, and without it, we would not have societies.

And if there’s an internet atheist out there who thinks they’ve never employed the No True Scotsman fallacy, remember the last time you had a conversation that went like this:

Sophomore: Science is unbiased. Religion is biased.
Antagonist: Lots of scientists are biased and scientific paradigms can bias a scientist against reality.
Sophomore: But no good scientist allows their bias to affect their results.