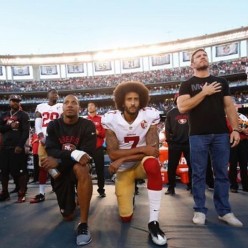 Folks, if you’re getting bent out of shape about the phase “Black Lives Matter,” and feel the need to respond with “All Lives Matter,” think about our history a little bit.

We started the revolution against British rule in the U.S. by saying all (male?) lives mattered, namely: “We hold these truths to be self-evident, that all men are created equal, that they are endowed by their Creator with certain unalienable Rights, that among these are Life, Liberty and the pursuit of Happiness.”

While we were saying this, White people in this country held slaves. And later, when some of those slaves took Britain’s side in the War of 1812 because they were promised their freedom, the Americans who won the war wrote a song that spent a verse making fun of the slaves who tried to win their freedom that way.

That song is the Star-Spangled Banner.

“No refuge could save the hireling and slave
From the terror of flight or the gloom of the grave,
And the star-spangled banner in triumph doth wave
O’er the land of the free and the home of the brave.”

A few years later, when some states said that Black lives mattered, enough people felt so strongly that they didn’t that we had to have a war about it. (This is after they worked tirelessly to violate the states’ rights of non-slave-holding states to make sure Black lives didn’t matter.)

Then those same Black folks had to endure lynchings, beatings, and more just to get to vote, go to school, and participate in civic life in general as equals. And at every step along the way, they were trolled from the peanut gallery by uncomfortable or outright malevolent White people who told them not to raise the issue, to slow down, or, sometimes, to just go die.

All of this took place under a national identity that supposedly held at its core that we’re all created equal with rights to life, liberty, and the pursuit of happiness. That held, in other words, that All Lives Matter.

When the official words and policies of a society match supposedly widely held society values, but the actual policies don’t, the most important duty of a citizen is to expose the mismatch between the actual policies and our societal values. That means being explicit about where we fail. It means having to be explicit and specific about the fact that Black lives matter–because generalities aren’t working.

Every time people do this, other people let their worst impulses take hold. They react to people raising the injustice as if they are causing an injustice by disrupting the status quo. Lord knows I understand–I’m a middle child. Conflict makes me very anxious. But that doesn’t mean that ignoring injustice is an option, and it doesn’t mean your comfort is more important than a just resolution. Don’t let your discomfort with disruption be the reason someone’s rights–including their simple right to live–get violated.

TL;DR: Maybe 2016 is the year that you should just shut the fuck up with the concern trolling and learn to live with your discomfort when people won’t have their concerns ignored any more.