It is no secret that Paul Ryan has been an enthusiastic devotee of the moral and economic philosophies of Ayn Rand. At a gathering of Ayn Rand acolytes in 2005, Ryan said, “The reason I got involved in public service, by and large, if I had to credit one thinker, one person, it would be Ayn Rand.” Later in 2009, after President Obama came into office, Ryan reiterated his devotion to Rand: “I think Ayn Rand did the best job of anybody to build a moral case of capitalism, and that morality of capitalism is under assault.”

But this year, after accepting the Republican Vice Presidential nomination, his affection for Rand’s views came under sharp scrutiny. Trying to distance himself from his earlier wholehearted endorsements of Rand, Ryan said:

If somebody is going to try to paste a person’s view on epistemology to me, then give me Thomas Aquinas. Don’t give me Ayn Rand.

An interesting juxtaposition. OK. Let’s take a quick look at the epistemologies of Ayn Rand and Thomas Aquinas:

Since man is not omniscient or infallible, you have to discover what you can claim as knowledge and how to prove the validity of your conclusions. Does man acquire knowledge by a process of reason—or by sudden revelation from a supernatural power? Is reason a faculty that identifies and integrates the material provided by man’s senses—or is it fed by innate ideas, implanted in man’s mind before he was born? Is reason competent to perceive reality—or does man possess some other cognitive faculty which is superior to reason? Can man achieve certainty—or is he doomed to perpetual doubt? The extent of your self-confidence—and of your success—will be different, according to which set of answers you accept. — Ayn Rand, Introduction to Objectivist Epistemology, 36.

Summation: humankind has the natural capacity to reason from sensory input to come to objective conclusions about reality.

Now it is natural to man to attain to intellectual truths through sensible objects, because all of our knowledge originates from the sense. . . . Now every form bestowed on created things by God has power for a determined actuality, which it can bring about in proportion to its own proper endowment; and beyond which it is powerless, except by a superadded form, as water can only heat when heated by the fire. And thus the human understanding has a form, viz. intelligible light, which of itself is sufficient for knowing certain intelligible things, viz. those we can come to know through the senses. — Thomas Aquinas (Summa, Prima 1:9; Prima Secundae 109:1)

Summation: humankind has the natural capacity to reason from sensory input to come to objective conclusions about reality.

Apparently “epistemology” was the new word on Ryan’s word-of-the-day calendar that day, and Aquinas and Rand don’t have a dispute with one another on how we know what we know. They say the same damn thing. 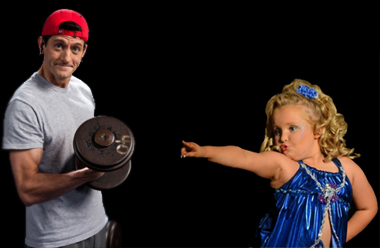 Of course, what Paul Ryan was trying to say is that he’s a Christian, not an atheist. Well, good for him. But pandering to Catholics doesn’t work when in the same breath you expose your ignorance of Catholic social teaching. The real question is, whose economics does Ryan prefer? Rand’s or Thomas’s? And on that question, the fact is that we didn’t have to wait for a mythical socialist Barack Obama to ascend for “the morality of capitalism” to “come under assault.” Long ago, back in them Dark Ages, Thomas Aquinas himself assaulted the very kind of economics championed by both Ayn Rand and her disciple Paul Ryan. Here is an article that does a good job of making that abundantly clear.

Conclusion: Paul Ryan is to intellectualism as Honey Boo Boo is to culture.