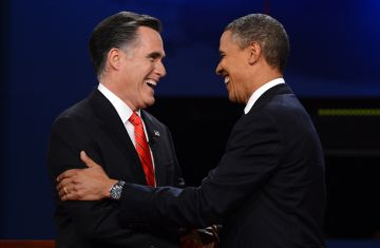 In last night’s debate, Mitt Romney accused President Obama of being hyper-partison, using the Affordable Care Act (Obamacare) as his sole example. Romney’s logic was that, since no Republicans voted in favor of the ACA, Obama was simply intent to shove his own agenda down the throats of Republican legislators. Obama’s response was to the point: Obamacare was “a Republican idea.”

But this response doesn’t even begin to scratch the surface of the hypocrisy and deceitfulness of Mitt Romney and the Republicans here. In an effort to project their own hyper-partisanship onto Obama, everyone seems to have developed an acute case of historical amnesia.

You may recall that Obama’s original health care agenda prominently featured the idea of a public option. Obama’s public option would be a new government run health care program akin to Medicare, whose cost would be low and overhead even lower. One of the main functions of the public option would be to serve as competition to HMOs and private health insurance companies, having the effect of driving down the cost of insurance across the board. This would have been great.

But Obama abandoned the idea. Why? Precisely because he’s a bipartisan president. Abandoning the public option cost him dearly among his own base, but for Obama, cooperation with the other side in order to get something that would do the job pushed through congress was a higher priority.

So, he developed the Affordable Care Act, all the pillars of which were Republican ideas from the start. This is what bipartisanship looks like.

The unpopular individual mandate, which would later be challenged and upheld by the Supreme Court, was an idea concocted by the right-wing think tank, The Heritage Foundation. Without the individual mandate, it would be impossible to prohibit private companies from denying coverage based on pre-existing conditions—by far the most popular feature of the ACA. Thus, the most popular feature (a Democrat idea) was only made possible by the most unpopular feature (a Republican idea). The individual mandate was touted by Republican presidential candidate Bob Dole in the 90s, was implemented by Mitt Romney in Massachusetts and was touted by him as a “model for the nation,” and was praised by Newt Gingrinch from the 90s to as late as 2011, until it came time for him to make his presidential bid. But when Obama adopted the individual mandate, it became anathema to the Republicans. All who once embraced it would come to reject it, including the Heritage Foundation, the very group that invented it in the first place! A Republican, private sector response to universal health care became in the Republican alternate universe “Stalinism,” “socialism,” “the death of freedom” itself. In the world of Republican politics, Obama is the anti-Midas.

Another major feature of the ACA is the state-operated exchanges. This, too, was originally a uniquely Republican idea. Obama adopted this Republican idea into his act, which allows self-employed people and small firms to take advantage of the broader choices and lower premiums available to large groups. These state exchanges also lead to greater competition among health plans, and thus ensure better quality care for our dollars. But now it must be repealed, because Obama, “the most partisan president in U.S. history,” adopted it from the Republican bag of goodies.

The truth is, Obamacare is essentially a Republican program through and through. It promotes individual responsibility—not government dependency. It puts an end to a system in which those who opt not to have insurance put the burden for their health care on the rest of taxpayers. It says to those who can afford insurance, you have to pay your fair share. And it providies subsidies and tax breaks to those who cannot afford a good health care plan.

(2) ‘Allow individuals, small businesses, and trade associations to pool together and acquire health insurance at lower prices, the same way large corporations and labor unions do.’….

(3) ‘Give states the tools to create their own innovative reforms that lower health care costs.’….

(5)….The tax break for employer-sponsored insurance….

(6) And finally, we shouldn’t forget the compromises that have been the most painful for Democrats, and the most substantive. This is a private-market plan. Not only is single-payer off the table, but at this point, so too is the public option. The thing that liberals want most in the world has been compromised away.

One of Romney’s many, many whoppers in last night’s debate was that Obamacare was a “government takeover of health care.” Of course, nothing could be further from the truth. While Democrats have always wanted public health care (i.e., Medicare for everybody), Obamacare is the Republican alternative. It keeps the private sector in charge and basically creates tens of millions of new customers for health insurance companies. By Republican standards, this is a big win. After all, it was their idea in the first place.

Romney and the GOP have developed sudden amnesia. They designed this plan. It’s their deal. Obama originally wanted a much larger compromise between Democrat and Republican health care ideas. He wanted a public option one of the functions of which would be to strengthen private health insurance by making their prices and services more competitive, which would bring in more customers. But Obama is not an idealogue, much to the shagrin of much of his base. He is a moderate, centrist, pragmatic cooperator. He chose bipartisanship (actually tilted heavily to the right) over his own base. That cost him dearly from the left. And so what did the Republicans do in thanks? They branded their own ideas “Stalinism,” voted a unanimous “no” against their own ideas, and have since tried to repeal the enactment of their own ideas 33 times. Yes, 33 times they have tried to repeal GOPcare. Why? Because the GOP doesn’t care. That is, they don’t care about their constituents and their health and well-being. The only thing they care about is retaking the White House from “the most partisan president in U.S. history.”

But they have no ideas for what to do if they are ever successful in repealing Obamacare. Romney claims he will preserve the preexisting conditions coverage, but he won’t. He will only preserve current (pre-Obamacare) law, which which prohibits insurance companies from denying care to anyone with preexisting conditions who has had continual health insurance coverage. That means, under Romney, if you don’t already have health insurance, you can still be denied coverage based on preexisting conditions. This policy will disenfranchise 87 million Americans who will be covered under Obamacare. When Fox News’s Chris Wallace pressed Senate Minority leader Mitch McConnell for what the GOP would do to cover tens of millions of uninsured Americans, McConnell had no answer. Why? Because Obama had already used up all their ideas. Pressed further, he finally replied, “That is not the issue.”

And there it is. For the GOP, uninsured Americans are not the issue. What’s the issue? President Obama. Repealing Obama himself has been the Republican congress’s primary legislative agenda for the past four years. That’s why they keep voting “no.” “No” to health coverage for uninsured Americans. “No” to jobs bills for unemployed Americans. “No” to veterans bills for the young men and women who fought on their behalf in Bush’s wars. No, no, no, no, no, down the line, across the board.

And who can blame them? After all, President Obama is the most partisan president the U.S. has ever seen. He has consistently and brazenly chosen Republican policies (foreign and economic) over those of Democrats.

One thought on “Obama: The Most Partisan President in U.S. History”