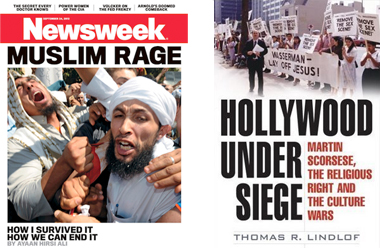 You’ve heard it from the media, from your colleagues at work, from behind the pulpit, and out in the street. The so-called “Muslim World” is on fire, irrational religious mobs are perpetrating senseless violence, and it’s not just because of a silly little anti-Muslim film that portrays Muhammad as a child molester. It’s because Islam is inherently violent and intolerant, and any Muslim who claims that Islam stands for peace and tolerance hasn’t read their own sacred texts very carefully.

Never mind that the coordinated attack that caused the deaths of four Americans at the consulate in Benghazi, Libya was certainly pre-planned and was perpetrated not by protesters but by extremists very probably with ties to al Qaeda, and never mind that the people of Libya went to the streets over the days after the attack to declare their condemnation of the attack as well as their condolences for the death of U.S. Ambassador Christopher Stevens, whom they considered a dear friend to their people. Never mind that they came out to condemn both hate speech against Islam and any and all acts of terrorism, saying that terrorism is not a true representation of Islam and the teaching of Muhammad. We all know the truth, and the truth is that Muslims are just inherently violent and irrational and are like uber-touchy about their prophet. Obviously widespread anti-U.S. sentiment in the Middle East has absolutely nothing to do with U.S. foreign policy. Or rather, as the good people at Fox News are now saying, they’re attacking us because we’re weak, not because, say, we’ve spent the last eleven years (and long before that) bombing them for their own damn good.

Of course, you may not have heard that protests and attacks on U.S. embassies and consulates were not limited to North Africa and the Middle East. Even in first world countries, such as Australia, Muslims mobbed together irrationally to blame the U.S. for a YouTube video.

But you have heard it said from your pastors, your Christian friends, your Fox News pundits: Christians would never behave like that. Unlike Muslims, Christians are civilized. They value free speech. They don’t respond violently to offensive religious material. OK, maybe in the olden days, in the Dark Ages or something. But not in the modern world, and certainly not in the first world. Let’s face it: Christianity is a religion of civilized peace, and Islam is a religion of irrational violence.

Like in 1988, when Muslims firebombed Saint Michel Theatre in Paris, France with Molotov cocktails, wounding thirteen people and severely burning four. Hang on. Wait, no, Muslims didn’t do that. Christians did. And why? Because that theatre in modern France dared to show Martin Scorsese’s The Last Temptation of Christ.

On October 22, 1988, a French Christian fundamentalist group launched Molotov cocktails inside the Parisian Saint Michel movie theater while it was showing the film. This attack injured thirteen people, four of whom were severely burned. The Saint Michel theater was heavily damaged, and reopened three years later after restoration. Following the attack, a representative of the film’s distributor, United International Pictures, said, “The opponents of the film have largely won. They have massacred the film’s success, and they have scared the public.” Jack Lang, France’s Minister of Culture, went to the St.-Michel theater after the fire, and said, “Freedom of speech is threatened, and we must not be intimidated by such acts.” The Archbishop of Paris, Jean-Marie Cardinal Lustiger, said “One doesn’t have the right to shock the sensibilities of millions of people for whom Jesus is more important than their father or mother.” After the fire he condemned the attack, saying, “You don’t behave as Christians but as enemies of Christ. From the Christian point of view, one doesn’t defend Christ with arms. Christ himself forbade it.” The leader of Christian Solidarity, a Roman Catholic group that had promised to stop the film from being shown, said, “We will not hesitate to go to prison if it is necessary.” . . . Similar attacks against theatres included graffiti, setting off tear-gas canisters and stink bombs, and assaulting filmgoers.

And let’s not forget the protests all across the U.S., where Christians came out in droves to condemn the film and harass the filmmakers. Let’s not forget that Pat Robertson (now friends with Mitt Romney) supported censoring the film, and Christians all over the country rallied to get the film banned from the United States.

And for what? Because in the film, The Last Temptation of Christ, the character of Jesus, while dying on the cross, undergoes a vision in which he is tempted to get down off the cross and engage in a lifelong, committed, romantic relationship with Mary Magdalene. He doesn’t do it, of course. He remains on the cross and fulfills his mission. But he was tempted to do it! And Christians were rightly outraged because that’s obviously so blasphemous and unbiblical. After all, the Bible nowhere says that Jesus was tempted in all the same ways we are (ahem, Hebrews 4:15). Firebombing a theater, beating up moviegoers, widespread angry protests, and calls for censorship were certainly perfectly rational when the Christians did it.

The perennial temptation is to think that way. While Jesus’s last temptation may or may not have been to give up his mission and have a normal life, as one who was tempted in all the same ways we are, perhaps his greatest temptation was the temptation to stereotype and discriminate against the Other:

A Canaanite woman from that region came out and started shouting, ‘Have mercy on me, Lord, Son of David; my daughter is tormented by a demon.’ But he did not answer her at all. And his disciples came and urged him, saying, ‘Send her away, for she keeps shouting after us.’ He answered, ‘I was sent only to the lost sheep of the house of Israel.’ But she came and knelt before him, saying, ‘Lord, help me.’ He answered, ‘It is not fair to take the children’s food and throw it to the dogs.’ She said, ‘Yes, Lord, yet even the dogs eat the crumbs that fall from their masters’ table.’ Then Jesus answered her, ‘Woman, great is your faith! Let it be done for you as you wish.’ And her daughter was healed instantly. (Matthew 15:22-28)

Jesus began with a myopic vision: he was sent only to care for Israelites. The Canaanite “dogs” were out of his purview. But it wasn’t until he was confronted with one of these dogs, face to face, that he discovered, to his surprise, that they are humans too, and dignified, even in their despair, capable of greater faith even than the so-called “faithful.”

He was tempted in all ways as we are, tempted to see the Other as less dignified, less worthy, less faithful, less capable of faithfulness, less inclined to tolerance. He was tempted to see the Other as Other, rather than as Self. At first, he couldn’t see his own people, couldn’t see himself, in her. But confronted with that Other, Jesus learned. He learned to sympathize. To sympathize with the enemy. Jesus learned.

His followers were harder to convince.