I’ve been thinking a lot about apocalypse. It might be because I’m reading The Walking Dead (a zombie apocalypse graphic novel) and Y: The Last Man (all the men on the planet except for one mysteriously die). Perhaps it’s because I’ve been reading Derrick Jensen’s Endgame. (Jensen is a reluctant apocalyptic prophet, who calls us to see that civilization is both intrinsically unsustainable and in its final throes of death.) And also because of Stephen Hawking, who thinks that we have about 200 years left on the planet Earth.

It’s not troubling to me that someday humans won’t be around. In some sense, I’ve believed it all my life; I used to believe that humans will go to heaven (or hell) and the 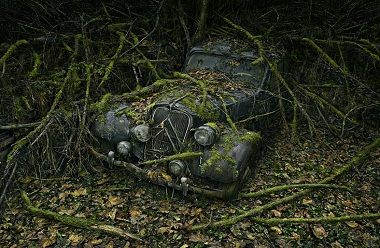 Earth won’t matter. But lately I’ve been seeing the subversion of that idea: Someday, whether because God takes us all to heaven (or initiates the kingdom of heaven), sends some of us to hell, or because we’ve polluted the environment to such an extent that it is no longer hospitable to human life, we won’t be here (or at least we won’t be here perpetuating and perpetrating the same horrendous disregard for nature that we currently thrive off of). Houses will crumble. Factories will be destroyed, no longer able to dump toxic waste into streams, and pollute the air. Forests will flourish. Our great civilizations will be covered over. Nature will experience her renaissance.

Of course, there will still be plastic.

Making me think matters are ever more dire is a recent article by Bill McKibben in Rolling Stone. I’m not going to tell you about it, just go read it. If I have to tell you how bleak the future of the environment looks, it’s probably because you own a corporation and have been always already ignoring it and further polluting it. Or perhaps you’re a Christian, or more than likely both.

A lot of Christians like to argue that God gave man [sic] dominion over the Earth, therefore we have every right to subdue, exploit, rape, and squeeze all we can out of it (of course this isn’t how they would put it; “stewardship” is the euphemism that Christians like to use to describe their pollution.) This dominionist argument has always struck me as peculiar. The word dominion is of the same root as our word Lord or dominus in Latin. In this view we have a God given lordship over all creation. Dominionists argue against animal rights and environmental issues proclaiming,“God gave us dominion!” or “Animals are ontologically different!” Therefore they1  abuse farm animals, exploit resources, pollute water and air, remove mountaintops in order to strip them of their coal, and many other horrendous acts (many of which involve oppressing and abusing human beings, but if I have to convince you that this is immoral… well, again, you’re probably a CEO).

But as Christians, our prime example of lordship is that which our Lord Christ has displayed. Can you imagine Christ displaying his lordship over his followers by forcing them to get pregnant and packing them in a crate where they cannot stand or turn around and then defending his actions by saying: “So our animals can’t turn around for the 2.5 years that they are in the stalls producing piglets, I don’t know who asked the sow if she wanted to turn around. . .The only real measure of their well-being we have is the number of piglets per birth, and that’s at an all-time high.”

Or imagine our Lord Christ growing chickens much bigger than normal by feeding them caffeine so they stay awake longer than usual and eat. Then, since if a chicken stays awake too long it will die, Christ feeds it downers to get it to sleep. Since it is always in pain, our Lord gives it aspirin.

It’s hard to imagine these despicable acts being perpetrated by Christ; Christians have traditionally seen our Lord Christ as loving, humble, peaceful. If a lamb strays, he leaves the 99 to find it (rather than say chopping it up and feeding it to the other lambs). He is kind and compassionate. He (in traditional Christian terms) sacrificed himself for his Creation, for those whom he had lordship over. He “though he was in the form of God, did not regard equality with God [his Lordship] as something to be exploited, but emptied himself, taking the form of a slave, being born in human likeness. And being found in human form, he humbled himself and became obedient to the point of death. . .so that at the name of Jesus every knee should bend, in heaven and on earth and under the earth, and every tongue should confess that Jesus Christ is Lord”2

So let’s take dominion literally. God gave us Lordship over the Earth? Then let’s follow the prime Christian example of Lordship; let’s die—die to self, self-interests, consumerism, or if we can’t stop our rapacious practices, let’s literally just die and let nature be—so that the Earth can be saved.