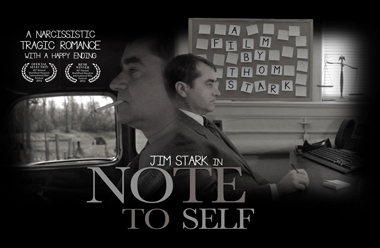 My first film, Note to Self, which won the Platinum Remi Award at the 45th Annual Worldfest Houston International Film Festival, is now available for free online streaming at notetoselfmovie.com. It is also available for purchase on Amazon Instant Video, DVD, and Blu-Ray. The DVD and Blu-Ray versions include special features: a theatrical trailer, a commentary track, a deleted scenes and outtakes reel, and cast and crew bios. The DVD and Amazon Instant Video present the original black & white version of the film. In addition, the Blu-Ray offers a choice between the black & white and an exclusive color version. Head over to notetoselfmovie.com to read about the film and the cast and crew, to see the trailer, to watch the film itself, and to find links to purchase the film in its various formats.

Our thanks to all the contributors who made this film possible!