Break on Through (To the Other Side)
Not long ago, I had a dream in which I rediscovered what it was like to believe in God -- a dreamscape epiphany. It was gone when I woke, of course, but I half-remember the feeling of something "clicking." I think I was also on some strange planet surrounded by orange sheep, but you know how dreams go. And I admit that I'm fascinated by God, by the idea of God, by the memory of God. I'm not very good at believing in things but I'm haunted. I don't think this is unusual: atheists are always banging on about God, so my atheist friends should probably stop snickering. 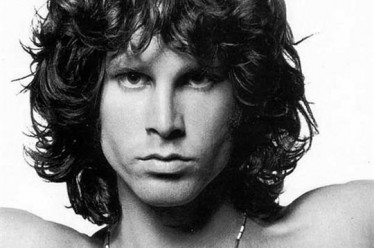 The truth is this happens in my waking life, too: there's a sense that this nihilism I've had so much fun embracing is still not the last word. It's like something flickering just beyond perception, an itch that never quite localizes into a place that I can scratch. I am reminded of Cormac McCarthy's The Road. McCarthy gives us a narrative landscape so utterly devoid of meaning or pathos that any sliver of hope, any pinprick of light, feels like the beatific vision. Likewise, I've laid waste to everything I think of, eviscerated anything that looked remotely like magical thinking, given negative capability the finger (screw you, Keats), burned it all down. And now, in the aftermath, every tiny shoot, every errant sunbeam, every warm breeze (metaphorically speaking) seems revelatory. I am haunted.

[At this point some of my Christian friends should also stop snickering. You know who you are.]

I took a gamble in writing my dissertation: I saved the heavy lifting until the conclusion, hoping that by the time I got there I'd have a conclusion to make. And things came together, it seems, at the last possible moment; as much as I lament how long this has taken me, had I finished sooner I'd have written something else. Yes, this seems serendipitous, even providential, but it's really just the way writing works. I'm not sure those are mutually contradictory thoughts.

One of the things I discovered is that I had to set the radical politics I was writing about in the context of neoliberalism, about which I could not be neutral. Neoliberalism -- which describes the hegemony of the market, to put it simply -- is the reason radical politics is important. In short: neoliberalism is very, very bad. I think it's crucial that politics not merely be reactionary -- just being against neoliberalism isn't going to get us very far -- but it also won't do to ignore the specifics of our present context. Wendy Brown offers one of the best discussions of neoliberalism and its effects, but what particularly interests me is the way in which it seems to beg to be described in terms of "principalities and powers." Not that this theological concept lacked resonance prior to this, but one of the things that haunts me is that there is a language here that gets at something important.

The other thing that I discovered along the way is that the politics I prefer as a response to neoliberalism is nonviolent and therefore anarchist. This is not entirely surprising, and there are many ways to parse what both "nonviolent" and "anarchist" might mean and how they are related, but I find myself more and more defending a pacifism I thought I had given up on. Of course we can talk about the limits of pacifism and its attendant problems, because they exist, but there's something attractive to me about a politics that refuses the machinations of violence.

The risk of violence is the risk of becoming the thing, or the same kind of thing, that one is fighting. My friend Tony Hunt calls this the "Animal Farm aporia": how do we not become pigs? (I even stole that from him for my dissertation. Hey, he got a footnote. Don't look at me like that.) That is the risk, and there's some history of that playing out, again and again. For some, that risk is worth it, and I get that. It is for Milbank, which is why he's neither a pacifist nor an anarchist (despite resonances with both in his work, especially Theology and Social Theory) and I'm pretty sure he's okay with that.

The risk of pacifism, then, is the risk of failure. This is not unique in and of itself (anything can fail), but it is the risk of failure precisely when some form of violence might have made the difference. My intuition is that those times are rare, and even then the decision to regard violence as necessary comes at a great cost. I think I'm willing to say that the cost isn't worth the slim chance that situation X might just be that rare moment. It might be, and if or when it presents itself compellingly as such, maybe I'll think differently. Honestly, though, I'm skeptical (which seems vaguely ironic).

This leads to two interesting observations. One, I'm not willing to say that everyone should unequivocally be pacifist, which means I need some way to theorize a recognition that not everyone will be. Again this seems to be a theological question of calling, or of vocation, or even election. I haven't suddenly glommed onto a developed metaphysics that makes that intelligible any more than I've grown a third arm and started  juggling toasters. But there's something about what I can only describe as the structure of this constellation of thought that intrigues me.

Two, nonviolence requires the cultivation of patience: viz., the patience to wait for an outcome that is not guaranteed without reaching for more "effective" (i.e., violent or coercive) means to get the job done when those means are incompatible with peaceful ends. Another friend of mine, Michelle Campbell, put this to me as a question of trust. Why, she asked, doesn't the literature on radicalism address the issue of trust? We kicked this around, and it ended up in the dissertation [Hey, she got a footnote, too. Shut up]:


Patience implies trust. To engage in a consensus-based decision-making process is an act of trust. To forgo hegemonic and counterhegemonic strategies for change is an act of trust. To renounce violence at any level is an act of trust – to renounce it at every level even more so. But this raises the question: what is the object of this trust? Radicals must trust each other, but to trust in others could just as easily lead to trust in a specific leader or vanguard. That seems all too pedestrian. To trust in humanity in general smacks of a naïve and untenable humanism. To trust in the inevitability of history seems teleologically problematic, even Hegelian. Perhaps it constitutes trust in the process itself. Perhaps there are as many names for the object of this trust as there are radical practitioners.

Yoder has the language of Christian theology to draw upon in naming this trust. For him, it is matter of faith in God, of "waiting on the Lord," of believing there to be a deeper logic to existence in which patient nonviolence might make sense. I am not saying that radicals believe in God whether they realize it or not. Nor can I say that Christian theology gives a name to something we know by other means. I do, however, think that we see here a specific kind of faith structure: a consistently and comprehensively nonviolent politics is inescapably eschatological. Lewis Call recognizes this in Postmodern Anarchism, writing that "a great many radical political visions – including most anarchist visions – contain an eschatology that is recognizably 'religious' in its structure, if not its content. If anarchist theory is to move beyond critique towards the articulation of a positive social, political, and ecological agenda, then the messianic element is perhaps unavoidable."

By this, too, I am haunted. I am circumspect in the dissertation because I don't want to speak for others, but I think I need to be open to the idea that my interest in a politics of nonviolence speaks in some way to a lingering sense of the transcendent: not that I can't have the politics I'm interested in without believing in something on the other side of nihilism, but that my interest betrays the fact that I already do.