A struggling Christian who shall remain anonymous emailed me with some questions about how to understand his struggles with some of the ignoble content in the Bible. I thought they were worthwhile, so I’m posting them here, along with my responses.

Hello Thom. I am a struggling Christian like you are. I know how righteous the Holy Spirit is and how loving Jesus is, but many of the things in the Old Testament I question. After reading the New Testament, I don’t think the Old Testament should even be a book for Christians. So I started reading Paul Copan’s book to search for answers. I like Copan’s intent to give us critics a better understanding of the Old Testament, but then I started reading your book [review of Copan’s book] and I discovered how many of his arguments are fallacious and illogical. I appreciate your honesty, and I wish there were more Christians like you. Many Christians either don’t know what is in the Old Testament, or they shove it under the rug. Anyway, I have four questions for you:

1. Are we still supposed to follow the laws in the Old Testament? Many Christians, if not all, have told me that in Matthew 5:17-18 Jesus says that he did not come to abolish God’s moral law, or the 10 Commandments. And by calling the covenant new during the Lord’s Last Supper, he made the first one obsolete so we no longer have to follow the social laws. I find this very confusing because everyone has their own interpretation on this subject. I would like to hear your words on this.

Ever since Paul, most Christians have believed that the Old Testament laws no longer apply to Christians. For Paul, that’s because the law had served its purpose, which was to show the futility of trying to live up to God’s standards on our own. For Paul, salvation didn’t come through obedience to the law, but by faith through the grace of Jesus. Of course, that doesn’t mean we don’t have to worry about doing good works. It just means, for Paul, that the law of love encompasses all of God’s standards. But for Paul, the cultural laws of Israel did not apply to non-Jews.

Yet that’s not an adequate solution for me. Although people like Copan attempt to argue that Paul saw the law as morally inferior to New Testament commands, the actual fact is that Paul stated emphatically in several different letters that the Laws of Moses were perfect. The problem for Paul wasn’t with the laws themselves, but with our own inability to live up them. I have a problem with Paul’s point of view, because to me it seems quite clear that the Laws of Moses were very far from perfect. They are morally substandard in serious and unsalvagable ways. So that’s a problem that’s not neatly resolved. My approach, as I detail in my book, The Human Faces of God, is to read these morally problematic texts as “condemned texts.” They are still scripture. And God still uses them to instruct us, but God uses them as negative instruction. They’re there to challenge us to use critical moral reasoning, and to warn us away from making the same moral mistakes made by so many of our spiritual forebears.

2. If an atheist tells me that I worship an evil God because of the slavery laws from Exodus 21, how am I supposed to defend against this? According to 1 Peter 3:15, we need to defend our faith.

I can’t tell you what your response to such an atheist should be. I can only tell you what mine would be. And it would be that the slavery laws are wrong, and that they were written by humans who got God wrong. But we can find God throughout the pages of the Bible by using our God-given moral reasoning. Wherever there is truth, wherever there is justice and compassion, that’s where God is. That doesn’t mean those parts are really inspired by God while the other parts aren’t. The inspiration lies not in the verbatim language of scripture, but in the struggle of God’s community to know God, the struggle that’s reflected in the conflicting views throughout the Bible about who God is and what God desires. The inspiration of scripture is bigger than the words on the page; it goes deeper to the struggles of the people of God who produced them.

3. If I am struggling in my faith, then how am I supposed to evangelize with confidence? In Matthew 16:15 Jesus tell us to evangelize, but it is hard to do so if I question parts of the Bible.

That question is based upon the assumption that an evangelistic message involves some claim about the inerrancy or infallibility of scripture. For me, and for most Christians, it doesn’t. Evangelism is spreading the Good News that in God’s community, justice and peace are available because of Jesus Christ. So evangelism isn’t just about preaching doctrines; evangelism is really inviting people to join a community that exists as an alternative to the unjust and violent structures offered by the world. Evangelism is an invitation to an alternative way of life made possible by the words and deeds of Jesus, and by his victory over the powers of sin (systemic injustice) and death.

It is not blasphemy to question the character of the different portrayals of God in the Bible. That’s not the same thing as questioning God’s character. That’s just saying that the men who wrote the Bible sometimes were very wrong about God’s character. I would argue that it’s blasphemy to affirm some of the ways that God is characterized in the Bible. It’s precisely out of zeal for God’s character that so many Christians throughout history have been forced to reject certain portrayals of God in scripture. For instance, Gregory of Nyssa, one of the chief architects of the doctrine of the Trinity, rejected the idea that the tenth Egyptian plague (the slaughter of the firstborn sons of Egypt) could be an authentic, historical portrayal of God’s actions. A moral God wouldn’t kill children for the sins of their parents, much less for the sins of one man, the Pharaoh. Gregory, a very orthodox theologian, rejected the tenth plague as historical. His solution was to read it as allegory. To him the killing of the firstborn sons of Egypt was a metaphor for the Christian’s need to kill off all the beginnings of evil within ourselves. While I don’t reject his strategy, my strategy is to read the tenth plague as a condemned text—as a text that speaks to our capacity as human beings to misdirect our wrath, to punish the innocent because we’ve been somehow victimized. We all have the capacity to do that, especially as nations, and we continue to do it to this day. So I read that text as a warning—this is the wrong way to characterize God’s justice. It’s there for our instruction, but not as a positive example. 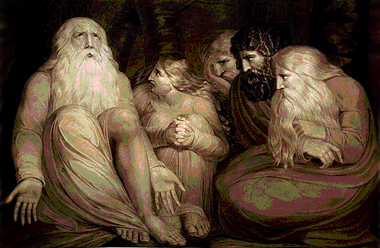 My second response to this question is simply, no, it is not blasphemous at all to question even God’s character. Job did it. And he had good reason to do it. Job never committed blasphemy, but he did call God unjust, and he did say that all the evidence showed that God wasn’t interested in doing what was right. If you want to call that blasphemy, then it’s blasphemy for God’s sake. It’s the refusal to accept that the way things are are the way things ought to be, even if they are divinely ordained. That’s a profound statement about suffering, one that isn’t very comforting to most Christians if they read it right. But it’s right there in our Bible. And it’s one of the texts we have to struggle with, and learn from. There often aren’t easy answers. Usually not, actually. But it’s the struggle through the ambiguity that makes us the kind of moral people that I believe God desires for us to be.

I don’t know if my answers will be of any help to you, but they’re my honest answers nonetheless.

6 thoughts on “Blasphemy for God’s Sake”