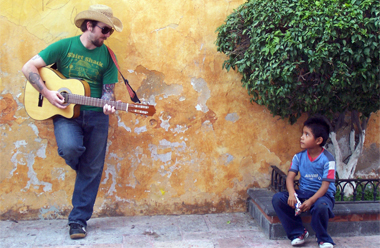 A college buddy of mine posted a quote on my Facebook wall today, a quote from a song I wrote back in 1999, at age 16. That instigated a revisitation of all the bad music I've written over the years. Since I'm turning 30 in two days, I thought I'd share some of it with you. I've left out much more than I've included. (I've even ignored an entire album. You'd thank me for it if you heard it.) All the recordings are quite poor. I never tried to do this professionally. So get over it.

01. gabriela's song (1999) - I wrote this at age 16. It's an instrumental which tells the story of the life of my daughter from birth to death. Admittedly, my daughter wasn't born until 2007, eight years later. But I knew back then that her name was Gabriela, and what her life would be like.

02. move on (2001) - A crummy, cliched Christian song that nevertheless holds a special place in my heart because my friend Frank and I loved to play it over and over again on slow afternoons back in Denver.

04. edinburgh mourning (2002) - Written for a co-worker of mine on whom I had a crush. She went to the UK on holiday one summer. This is about that.

11. valparaiso (2003) - A love song to the city of Valparaiso de Chile. I spent an afternoon with her once, and never left.

13. under the sun (2004) - A song written to my friend Matt Bellows, shortly after his death in his early twenties.

14. the road (2004) - Probably my favorite of my songs, although I messed up the guitar part in one section of this recording.

15. rock in my shoe (2004) - FTR, the disparaging reference to gay marriage and rampant abortions is meant to be ironic. The first three verses of the song are meant to be interpreted in light of the fourth. I had a crush on this girl, wore my heart on my sleeve for her, and she didn't reciprocate. The melodrama of the first three verses is meant to poke fun at my own version of suffering, and weren't necessarily written in my own voice.

16. danger, danger (2005) - I wrote this song for some friends of mine and performed it at their wedding. I don't know what's up with the effect I put on the guitar, so don't ask.