Joshua Wrote the Battle of Jericho 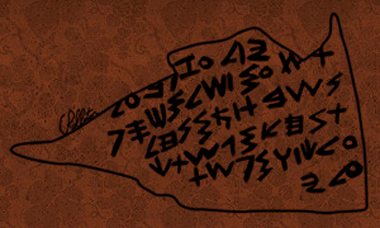 Matthew Flannagan is apparently a glutton for punishment. He's certainly an accomplished straw-man artist. But what else is new? In my review of Copan's book, I critiqued Copan for stating that Joshua wrote Joshua, pointing out that writing didn't develop in Israel until a few centuries after Joshua's lifetime. On his page, Matt has posted a series of quotes from my Copan review which Matt thinks displays a blatant inconsistency in my arguments. Here is the content of Matt's post (I believe in its entirety—it was emailed to me by a third party):


“Writing didn’t develop in Israel until the eleventh century BCE at the earliest, about two hundred years after the period of the purported conquest of Canaan.”
Thom Stark, "Is God a Moral Compromiser" p 249, criticising Copan for suggesting Joshua wrote Joshua. The reason, writing did not develop in that region to [sic] after the 11th century.

“what the Amarna Letters tell us is that Jerusalem and Shechem were under the direct control of Egypt, in fact, under the control of the Pharaoh. The vassal kings of Canaan lived in these fortified cities, along with civilian inhabitants, as we’ve already established. It’s also worth noting that the Amarna Letters do not contain correspondences between Egypt and the kings of Jericho and Ai. Why is that? Well, probably because Jericho and Ai were ruins, and had no vassals.”
Thom Stark, “Is God a Moral Compromiser” p 304, citing writings in Canaan from the time of the conquest, two hundred years before he claimed there was writing in the region, to prove Copan is mistaken for believing Jericho existed.

“Referencing the Amarna Letters (mid-fourteenth century BCE) correspondences between Egyptian officials and Canaanite rulers and officials, written in Akkadian cuneiform, Hess begins by noting that the Akkadian term “king” is used throughout to refer to the Pharaoh. The Akkadian word is šarru, and its logographic Sumerian equivalent (also used in the letters) is LUGAL. The kings of Canaan, in their letters to Pharaoh, address him thus: ana šarri beliya, “to the king my lord.” However, this same word is sometimes used for the Canaanite kings themselves. For instance, the king of Hazor refers to himself as šarru of Hazor (“king of Hazor”)."
Thom Stark, "Is God a Moral Compromiser" p 301-302, now referring to writing in Canaan from the fourteenth century, several centuries before the 11th century again to argue Copan is mistaken.

What Matt thinks is that I've contradicted myself, and he thinks these quotes display that contradiction. Matt's supporters agree:

In response to Matt's post, Brendan Malone writes, "Gold." Cory Tucholski writes, "Thom Stark was inconsistent in his argumentation? Whoa. In other news, the sun rose and is expected to set." Joe Coppa writes, "I'm glad to see Stark and his claims addressed. There are more and more of these guys popping up all the time. They become the darlings of internet atheists like John Loftus et al. Another former believer turned atheist ((Note: I am not an atheist.)) I'm seeing a lot of on you tube is Matt Dillahunty of 'The Atheist Experience.' I'm sure it takes a considerable amount of time and patience to respond to all of the claims of the skeptics. Thanks for your effort, Matthew!" Cornell Schuch writes, "Nice take down!!"

So, Matt's "argument" is that because I said writing didn't exist in Israel until after Joshua's period, and also that writing existed in the region of Canaan before Joshua's period, I'm a dolt. (My word, not Matt's. It's just implied.) Well, what Matt has done is twofold: (1) he has twisted the meaning of my quote on writing in Israel in order to make it conflict with the other quotes on the Amarna Letters, and (2) he has displayed that he doesn't have a basic working knowledge of how languages developed among various peoples in the ancient world.

First, the straw man. I wrote, "Writing didn’t develop in Israel until the eleventh century BCE at the earliest, about two hundred years after the period of the purported conquest of Canaan." Matt then changed what I wrote, summarizing it thus: "writing did not develop in that region to [sic] after the 11th century." The problem? Matt thinks that when I said, "in Israel" I meant, "in that region." Admittedly, that's one possible interpretation of "in Israel," the only one capable of yielding the contradiction Matt implies I produce. But what I actually meant was, "among Israelites," or, "among the people of Israel." Hence, there is actually no contradiction between my statement that writing didn't develop among the people of Israel until the 11th century at earliest (and that's a very charitable earliest), and my statement that writing existed in elite circles in the Canaanite city-states in the century prior to the purported conquest of Canaan by the Israelites. Sorry, Matt &co. Try again. (Or don't rather, as it will undoubtedly be another waste of everyone's time.)

Second, in reality, the kind of writing capable of producing narratives of the kind that appear in Joshua didn't develop among Israelites until the ninth century at the earliest. Yes, there are a scant few inscriptions from the eleventh and tenth centuries, but none of them are in Hebrew (they are Phoenician inscriptions), and none narratives. The earliest of these is dated to the eleventh century—two centuries after the latest possible date of the purported conquest. But writing of the kind we see in the book of Joshua doesn't develop anywhere until a nation has become well established and has developed an elite class. One needs to have a scribal tradition in order to produce that kind of writing, and the evidence indicates that no such scribal tradition existed among Israelites until the ninth century at the earliest, and even in that period the evidence is sparse. That's (yes) about four centuries after the time of the purported conquest.

The other thing is that the Amarna Letters (which are correspondences between the Egyptian ruling class and the elite Canaanite kings in the Canaanite city-states of the fourteenth century BCE) are written in Akkadian Cunieform. So unless someone wishes to argue that Joshua (a slave-laborer) learned Akkadian Cunieform, without the aid of a scribal tradition, while wandering through the desert, and then wrote the book of Joshua in Akkadian—a scenario whose plausibility is about zero to two percent (by my internal calculator)—Copan's attribution of authorship of the book of Joshua to the person of Joshua remains little more than quaint.

Now I'm not challenging Matt's credentials. He has credentials, just not in ancient Near Eastern studies, epigraphy, Semitics, or anything relevant to the discussion he's trying to have here. Fortunately, Matt doesn't need another degree to get a basic working knowledge of the relevant features of writing and literacy in ancient Israel. He can just pick up a copy of my professor Christopher Rollston's latest monograph, Writing and Literacy in the World of Ancient Israel: Epigraphic Evidence from the Iron Age, which is a concise yet dense introduction to the field. Matt's friends would do well to pick up a copy also.