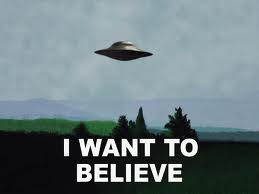 ‘Cause I don’t believe in anything

I like to think of myself as a fun guy. I crack jokes, I’m easygoing. And I’m not just fun, but funny as well: I go for laughs and I get them, if not every time. But there’s also an edge to my humor. I can be sarcastic, sardonic, cynical. I sneer at nearly everything. I was once accused of being The Joker — why so serious?

But it’s true there is not a lot I take completely seriously. I have a hard time getting worked up about anything. It might be the flattening of affect that comes with my depression issues — my affectation of cynical nihilism is a compensation for lack of affect. There’s a nice wordplay there. At least not taking myself seriously serves to attenuate my narcissism.

But partially I sneer because I’m afraid. I’m afraid to hope. I’m afraid to believe, not because there aren’t good reasons to believe or things to believe in but because I fear the failure of my own capacity for belief. I once went out for a date with a girl in high school and never called her again because she was too nice. I wasn’t looking for someone trashy, necessarily, but I liked this girl as a friend and didn’t want her to become just another one of my ex-girlfriends. At least that’s what I told myself — I’ve never been a romantic genius. But in the same way that I did not want to add this girl to that list, I’m tired of contributing to the fetid pile of things I used to believe.

So I don’t believe in anything, but what this really means is that I only believe in things that I haven’t identified as beliefs yet — things that are, in some sense, believed for me by the wider culture of which I am a part. Things that have been constructed as part of my upbringing. Things that are at least partially the product of my experiences and relationships. The scorched-earth tactics of my skepticism have left me with beliefs I have not chosen. I’ve rooted some of them out, but there is always a remainder, the dangerous bits of the tumor that couldn’t be removed.

All of this colors my reaction to Occupy Wall Street. On one hand, I’m fascinated by what appears to be a leftist populist uprising. The sheer scope of it — the number of cities and countries in which this has sprung up — makes it difficult to dismiss. The general dissatisfaction with the status quo of neoliberal capitalism is heartening. The fact that the authorities in some places are reacting violently speaks to the timeliness of the message. I don’t know what they’ll accomplish, but something is getting itself said here.

On the other hand, I’m not a joiner. I don’t believe. Anarchists and conservatives are panning the movement as a bunch of whiny liberals, and there’s some truth to that. The movement is loosely grounded in the consensus-based decision-making process (General Assemblies and all that) associated with some forms of contemporary anarchism (and anarchist David Graeber played a role there), but their agenda, such as it is, is largely reformist: they want capitalism to play nice.

There’s a pragmatic logic there: if we’re going to have capitalism, we should at least try to attenuate its more deleterious effects. The idea that the market — Smith’s “invisible hand” — will channel self-interest into the public good is a pipe dream. This is not what has happened. In order for capitalism to be responsive to the public good at all it needs to be tweaked. It needs to be regulated. It doesn’t actually work. Not for the 99%. What it’s very good at is funneling wealth to a handful who know how to work the system. And it’s a feedback loop: the more wealth you control, the more of the system you can gank in your favor. It’s not a meritocracy. It’s not about industry and inventiveness. It’s a game, and the people really in the game play it to win.

What passes for the left in the United States seeks to maintain the compromise between capitalism and the public good. The reactionary right has grown weary of the compromise and wants to unleash the beast of the market on the public. The debate, as we are seeing in Washington, is getting ugly and rancorous, and the right is winning at the moment, mostly by virtue of being bigger dicks about the whole thing.

This is a long way to say that while I’m sympathetic to OWS, I’m not sure what they’re going to accomplish. If they get their way, we’ll get some reforms, and these will be helpful in the short term, but it will amount to enabling a dysfunctional system. If they fizzle, or get put down, it could set leftist activism back, which is not to say they shouldn’t try. My reticence might just be an unhelpful acquiescence to my own conditioning. Perhaps my imagination has been stunted. Between peaceful protesters and pepper-spraying police, it’s not hard to pick sides, even if I’m not going to pitch a tent.

Maybe something more than I’m seeing is taking place. Something is going to emerge out of the dialectical tension between the resistance and the resisted, and we have no control over what that is. It could be something wonderful. Something new. Something unexpected. Something hopeful.

I just wish I could believe.

One thought on “Mr. Jones and Me”