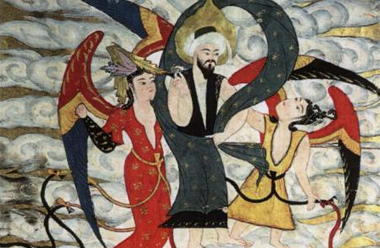 According to the standard interpretation of surah 4:157-159 of the Qur’an, Jesus was not actually crucified and killed. One major interpretation says that another person was substituted for Jesus on the cross, and the Jews only thought they had successfully crucified Jesus. The passage reads thus:

[The Jews said,] “We have killed the Messiah, Jesus, son of Mary, the Messenger of God.” (They did not kill him, nor did they crucify him, though it appeared like that to them; those that disagreed about him are full of doubt, with no knowledge to follow, only supposition: they certainly did not kill him—God raised him up to Himself. God is almighty and wise. There is not one of the People of the Book who will not believe in him before his death, and on the Day of Resurrection he will be a witness against them.) (4:157-159)

There are, however, several problems with this interpretation, as many Islamic commentators have noted. Several early commentators, in fact, argued against the straightforward reading of the text, asserting that in fact Jesus was crucified as the injili (“Gospels”) record.

One reason commentators offer in opposition to a straightforward reading of surah 4:157-159 is that other suwar indicate clearly that Jesus in fact died. For instance, surah 3:55: “God said, ‘Jesus, I will take you back [mutawaffika] and raise you up to Me: I will purify you of the disbelievers. To the Day of Resurrection I will make those who follow you superior to those who disbelieved. Then you will all return to Me and I will judge between you regarding your differences.” In another surah, Jesus speaks to God, saying, “I told them only what You commanded me to: ‘Worship God, my Lord and your Lord.’ I was a witness over them during my time among them. Ever since You took my soul [mutawaffika], You alone have been the watcher over them: You are witness to all things” (5:117).

Both of these suwar speak of God “taking” Jesus. The word here (mutawaffika) occurs over 25 times in the Qur’an, and in each case refers to someone’s death. Especially instructive is its usage in 39:42:

God takes [mutawaffika] the souls of the dead and the souls of the living while they sleep—He keeps hold of those whose death He has ordained and sends the others back until their appointed time—there truly are signs in this for those who reflect.

The same idea is expressed in surah 19:33, in which an infant Jesus speaks to Mary’s slanderers: “Peace was on me the day I was born, and will be on me the day I die and the day I am raised to life again.” Earlier in the same surah, the same language is used with respect to the executed John the Baptist: “Peace was on him the day he was born, the day he died, and it will be on him the day he is raised to life again” (19:15). Thus, here Jesus speaks of his death as yet to be fulfilled, whereas in 5:117 Jesus speaks of his death as an event in the past.

Therefore, it is clear that a straightforward reading of 4:157-159 would be at odds with numerous other passages throughout the Qur’an which speak of Jesus’ death. Perhaps a genuine contradiction exists, although given the singular authorship of the Qur’an, this would be unlikely. How then should we interpret surah 4:157-159? Let’s look at it again:

[The Jews said,] “We have killed the Messiah, Jesus, son of Mary, the Messenger of God.” (They did not kill him, nor did they crucify him, though it appeared like that to them; those that disagreed about him are full of doubt, with no knowledge to follow, only supposition: they certainly did not kill him—God raised him up to Himself. God is almighty and wise. There is not one of the People of the Book who will not believe in him before his death, and on the Day of Resurrection he will be a witness against them.)

Many have argued that the reason Jesus is said not to have been killed here is because God would not permit a prophet as holy as Jesus to suffer such an ignoble death. But Islamic scholar Mahmoud Ayoub decisively refutes this argument, pointing to numerous prophets identified in the Qur’an who suffer for the sake of God’s cause. Ayoub then offers this interpretation of the above passage. In light of the fact that the Qur’an has no reason to deny that a good prophet could suffer for God, Ayoub asks,

Why then . . . does the Qur’an deny the crucifixion of Christ in the face of apparently overwhelming evidence? Muslim commentators were not capable of refuting the crucifixion convincingly. . . . Commentators have taken the verse as a historical statement. However, this statement, like all the other statements about Jesus in the Qur’an, does not belong to history, but to theology in the broadest sense. . . . The reproach of the Jews, “for their saying: ‘We have surely killed Jesus the Christ, son of Mary, the apostle of God,’ ” with which the verse starts, is not directed at the telling of an historical lie, or at the making of a false report. It is rather, as is clear from the context, directed at human arrogance and folly, at an attitude towards God and His messenger. The words identifying Jesus are especially significant. They wished to kill Jesus, the innocent man, who is also the Christ, the Word, and God’s representative among them. By identifying Christ in this context, the Qur’an is addressing not only the people who could have killed yet another prophet, but all of humanity is told who Jesus is.

The Qur’an is not speaking about a man, righteous and wronged though he may be, but about the Word of God who was sent to earth and who returned to God. Thus the denial of the killing of Jesus is a denial of the power of men to vanquish and destroy the divine Word, which is forever victorious. Hence the words, “they did not kill him, nor did they crucify him,” go far deeper than the events of ephemeral human history; they penetrate the heart and conscience of human beings. The claim of humanity (here exemplified in the Jewish society of Christ’s earthly existence) to have this power against God can only be an illusion. “They did not slay him . . . but it seemed so to them.” They only imagined doing so.

The words, wa lākin shubbiha lahum do not disclose, therefore, a long-hidden secret of divine deception; rather they constitute an accusation or judgment against the human sin of pride and ignorance. They are explained further in what follows: those who have disagreed about Christ are surely in doubt concerning the truth. They have no knowledge; they follow only conjecture, the foolish imaginings of their minds. What is the truth? It is, I think, the affirmation, once again, that God is greater than human powers and empty schemes: “They did not kill him, [that is, Jesus the Christ and God’s Apostle] with certainty, rather God took him up to Himself, and God is mighty, and wise. Again, human ignorance, delusion and conjecture are all identified as a lack of certainty or firm faith. In the phrase, “and God is mighty and Wise,” these human limitations are contrasted with divine power and infinite wisdom.1

This reading of 4:157-159 certainly resolves the tension with the other passages which state clearly that Jesus was subject to death. But perhaps some will think Ayoub’s reading fanciful. On what grounds does Ayoub take the recourse to metaphor here? Although Ayoub himself does not make this argument, I would offer another passage from the Qur’an which would reinforce Ayoub’s reading of the passage in question. This other passage is from the second surah, and thus appears in the Qur’an prior to the statement that Jesus did not die:

Do not say that those who are killed in God’s cause are dead; they are alive, though you do not realize it. (2:154)

I would argue that this verse should function as a hermeneutical key to 4:157-159. God expressly tells the Prophet not to say that martyrs killed for God’s cause are dead. Why? Because despite their death, they continue to live in God’s care. Then, just two suwar later, the Prophet denies that Jesus was truly killed. Note the similarity: “they are alive; though you do not realize it” and “they did not kill him, nor did they crucify him, though it appeared like that to them.” I would argue, therefore, that 4:157-159 is simply putting into practice the instruction given in 2:154 about how to speak of those who have died for God’s cause. To deny that Jesus was crucified and killed is not to deny the historical event, but to deny its finality, as well as to deny the significance that Jesus’ executioners ascribed to the event.

This does not, however, solve the problem fully. There remains the question of the interpretation of 4:159: “There is not one of the People of the Book who will not believe in him before his death, and on the Day of Resurrection he will be a witness against them.)” The translation of this verse is very difficult; there are a number of ambiguities.

First, the “People of the Book” can refer to Jews and Christians (and others with their own scriptures) as a collective, but here it is unlikely that it refers to all people of any book. The immediate context refers only to the Jews, thus I would argue that “People of the Book” in this case is restricted to Jews.

Second, the above translation says, “who will not believe in him before his death.” But the prepositional phrase here can be translated either “in him” or “in it.” So either it’s talking about belief in Jesus (and his message), or belief in the fact that he was killed. This drastically affects the meaning of the verse.

So, the verse could mean, “There is not one of the Jews who will not believe that Jesus died before he [the Jew] dies, and on the Day of Resurrection, Jesus will witness against them in this false belief.” But this seems very strange.

Another possible reading is that each Jew will come to believe in Jesus before s/he dies, and that Jew will be a witness against those who executed Jesus (“them” being Jesus’ executioners and those who rejected him in his own day, not the People of the Book in general). This may seem like a bold claim—that every Jew will come to believe in Jesus’ message, but if I’m not mistaken, the Apostle Paul made rather a similar claim (Rom 11:26). So perhaps it’s not so farfetched for the Qur’an to hold this view.

Whatever we do with this particular verse (the ambiguities are too many to solve the question definitively), these two facts remain: the Qur’an states that a righteous martyr is not to be spoken of as having been killed; the Qur’an speaks of Jesus’ death in indirect (yet clear) ways in numerous other suwar. These two facts mitigate against a straightforward reading of 4:157-159, which leaves us to conclude that the Qur’an states (1) that Jesus died a martyr’s death for God’s cause; (2) that, nevertheless, his death was not final, and (3) that it did not have the significance Jesus’ executioners wished to ascribe to it.

11 thoughts on “Never Say Die: The Death of Jesus in the Qur’an”