Most Americans believe they have a material body and an immaterial spirit. (According to a 2009 Harris Poll, 82% of American adults believe in God, 75% believe in heaven and 71% believe in the survival of the soul after death.) I won’t go into whether the immaterial part can be subdivided into soul and spirit but will focus on the larger question of whether human beings are more than bodies, which is what I think.

If the spirit exists, why haven’t doctors and scientists found it? Because science is limited to studying the physical world with the five senses. It’s as likely to see the spirit as it is to smell the speed of light. Something without material substance won’t register on an EEG, CT, MRI or other scan. To find the immaterial you could look for its influence upon the material, like “seeing” the wind in the swaying trees.

Some neurologists claim to have found the spot where we experience the spiritual. This portal between dimensions is located in the brain’s temporal lobes. (Turns out Descartes was not far off. He suspected the “seat of the soul” was the pineal gland, which is situated a few layers deeper in the brain.) In his book Why God Won’t Go Away, neuroscientist Andrew Newberg points out that: 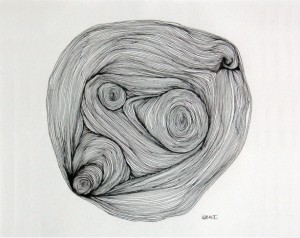 The brain is set up in such a way as to have spiritual experiences and religious experiences. Unless there is a fundamental change in the brain, religion and spirituality will be here for a very long time. The brain is predisposed to having those experiences, and that is why so many people believe in God.

Some might say we evolved this capacity because it conferred survival advantages, but it could also be that our brains are predisposed to having spiritual experiences because we have a spirit.

“In recent years we have discovered that certain areas of the brain are the centers for various activities from movement of our limbs, to our vision, our memories and emotions. If seeing something, for example, activates a certain brain activity; does that mean that what we see is only imagined?” Shankar Vedantam, Searching for the Physical Basis of Spirituality.

Psychologist Daniel Batson notes: “The brain is the hardware through which religion is experienced. To say the brain produces religion is like saying a piano produces music.” To use another keyboard analogy, the temporal lobe is where spiritual messages are “typed” into the mind.

But just who is typing those messages? The Holy Spirit? Our subconscious? Your answer might have more to do with your a priori assumptions than with hard data. Another word for these is “faith.”

As finite beings, we don’t have much to work with when it comes to understanding God and processing spiritual input. The average human brain weighs three pounds. (Einstein was an exception at 2.7 pounds.) It is about 80% water, which means just seven ounces are solid tissue.

The brain is not lazy but it is soft—the consistency of JELL-O—and flabby. At nearly 60% fat, it’s the fattest organ in the body. When cranking at full capacity it uses enough energy to light a 25-watt bulb. Not a lot of candle power with which to contemplate the Creator.

If we kept our puny physiology in mind we would harbor fewer illusions about being able to:

master the mysterious,
unscrew the inscrutable,
comprehend life’s conundrums,
elucidate the enigmas of the eternal.

41 thoughts on “Spirit and Brain”