[Cross-posted from Exploring Our Matrix] 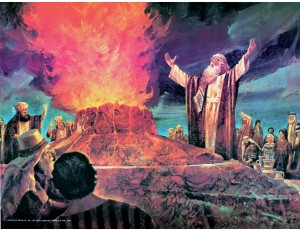 The title of this post is not a complaint; it is merely an observation. No one confronts the representatives of another tradition with a contest to see which one’s deity will send fire from heaven as Elijah did. No Christian blogger claims that those who comment negatively will be struck with blindness for doing so, as apostles did. God is depicted in many parts of the Bible as knocking down city walls, parting seas and so on. Yet no Christian dominionists are likely to march around Washington D.C. and see it fall into their hands.

Those who claim they “believe the whole Bible” and “take it literally” are being dishonest. Their pastor may have preached recently on the story of the fall of Jericho, but it was applied to God “making the strongholds of sin in your come life crumbling down”, not to a battle plan to take a city.

To be fair, not all Biblical authors view God in the same way. And so there is no single “Biblical view of God”. But certainly God as depicted in some parts of the Bible is not the concept of the deity served by Christians today.

The question a Christian needs to ask is whether they have the courage to admit that their view of God is not the same as that of many depicitions in the Bible. Do you have the courage to take the Bible’s actual words completely seriously, even when the result is that you are forced to acknowledge that you do not accept their literal truthfulness?

Let me end with a couple of thought-provoking quotes from Don Cupitt’s book, which I just finished reading:

“The Virgin Mary may cure many people in Portugal but she is much less active in Libya, whereas vaccination and inoculation are observably beneficial – and equally beneficial – in both cultures, the local religion in the end making no difference at all” (Don Cupitt, Taking Leave of God, p.123).

“To put it bluntly, classical Christianity is itself now our Old Testament…We have to use traditional Christianity in the same way as Christianity itself has always used the Old Testament. In both cases there is a great gulf but there is also continuity of spirit and religious values…When a Christian sings a psalm he knows there is a religion-gap and a culture-gap, but it does not worry him because he believes his faith to be the legitimate successor of the faith of the psalmist. Similarly, since the Enlightenment there has developed a religion-gap and a culture-gap between us and traditional Christianity, but we may still be justified in using the old words if we can plausibly argue that our present faith and spiritual values are the legitimate heirs of the old” (Don Cupitt, Taking Leave of God, p.135).