When We All Get to Heaven
If it weren't for Facebook, I would have missed the flap over Rob Bell this past weekend. 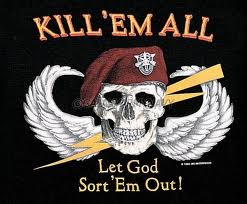 Here's the story in a nutshell: Bell's publishing company released a trailer for Bell's forthcoming book, Love Wins: A Book about Heaven, Hell, and the Fate of Everyone Who Ever Lived (one assumes he is speaking generally), in which Bell makes universalist-sounding noises and wears a fluffy turtleneck. Justin Taylor, yet another self-appointed watchdog of orthodoxy (they are legion), wrote a blog post outing Bell as a universalist based on the video -- despite Bell not actually saying this in the video, and Taylor not having actually read the book -- and denouncing him as a heretic. This is probably a win for Bell, since it will drive book sales and heretics tend to be more interesting anyway. It is also meaningless in an evangelical culture where getting pissed and starting your own church is the normative response to conflict, but I digress.

Taylor's take on things was picked up by John Piper, who now-famously tweeted "Farewell, Rob Bell," despite not having read the book, either. It would be really fun if he also hadn't watched the video, but I don't know that. At any rate, this has launched a social media firestorm, with people lining up on either side and tweeting and posting links and blogging and I told myself I'd stay out of it.

I don't really care if Bell is a universalist. Universalism is not new, nor is its introduction to evangelical culture, though Bell's video is certainly generating some fresh discussion. And it remains to be seen if Bell really is a universalist or if, as one blogger predicts, he's going to end up affirming some combination of conditional annihilism and inclusivism. He may end up somewhere completely different. This will presumably be made clear when the book hits the shelves (and subsequently flies off of them).

What I find interesting, however, is the hullabaloo itself, because I think there's more at work here than just the (all-too) typical heretic-hunting. Universalism is uncomfortable because it takes away the evangelical sense of calling -- particularly Calvinist election -- but also because it exposes and betrays one of Christianity's dark secrets: there is no justice.

Heaven and hell are artifacts of apocalyptic, and apocalyptic arose as a response to injustice; if, as seems to be the case, the wicked are not always punished and the righteous are not always vindicated, then perhaps this will be rectified at some later date. At first this was national, and largely temporal: faced with exile and oppression, Israel looked forward to a time when God would come in and make things right. Later, this became personal as well: God would not only restore the nation, but also individuals. Individualism is not solely the product of modernism or liberal democracy -- it has its roots in the doctrine of resurrection.

Jesus' followers proclaimed him as the agent of justice, the one who had come to set them free. But national justice did not materialize. In fact, almost the opposite happened. Rome did not fall; Jerusalem did. This was vindication, of a sort, for those who opposed Herod's temple, but did nothing to speak to Roman oppression. It makes sense, then, that attention would turn away from national identity and the fate of a people (especially as the church became less Jewish, though there may be a dialectical chicken-or-egg dynamic here) and more toward the fate of individual souls, leaving justice in the here-and-now to be worked out amongst ourselves. Whatever the perceived injustices of the temporal order, they will be sorted out in the afterlife.

Belief that God would judge, finally and fairly, the immortal soul meant that we could be much more cavalier about life itself. Kill 'em all; let God sort 'em out. The doctrine of resurrection, which offered hope to the martyrs who were willing to die rather than perpetuate injustice, was perverted into a justification for killing with impunity. God's righteous judgment ironically made something like the Inquisition thinkable.

Medieval Christianity, with its invocation of purgatory and the possibility of mortal sins, retained the sense of eternal judgment, even for the saved. But Luther's articulation of justification by faith changed this, and Calvin's soteriological codifications brought it home even more forcefully. Justice is not apprehensible by the human mind, certainly not the unregenerate mind. Justice is meted out according to some inscrutable divine plan. This life and the next are governed by God's unassailable sovereignty. It is not so much that God is going to set things right in eschaton or balance the scales in the afterlife as everything has been decided and we didn't get any say in the matter.

This is functionally no different than an agonism of fates. On one hand, there's a refreshing candor that can be cultivated here: yes, of course the universe seems random and unjust. God's in charge and we don't get to look at the playbook. Face up to it. On the other hand, it's functionally nihilistic: ultimate meaning is bound up in that inscrutable divine plan to which we are not privy. It leaves us in the same place apocalyptic started from, only now with a guarantee that we're not going to make sense of things. Whatever justice there might be must be wrested from the fates. This is why evangelicals can condone torture and call for spending cuts on poverty relief.

What does this have to do with universalism? Universalism is threatening to evangelicals, especially to people like Piper, because it brings us even closer to full circle. The afterlife now has nothing to do with any kind of differential justice -- that is, a separation of "good" and "bad" or "believer" and "unbeliever" or "chosen" and "not chosen." But Piper can't complain that Bell is watering down justice because Piper's theology has already done that. To argue that there should be a hell for someone like Hitler to go to is to capitulate to works righteousness.

It seems that things could have gone the other way; if God is righteous judge, then we should get out of the judging business, particularly that aspect of the judging business that lays claim to the lives of others. Maybe universalism -- or whatever Bell cooks up -- will get us closer. That remains to be seen. At any rate, "Love wins" is too optimistic for me; my take on things is more like "everybody dies." But on my better days I'm willing to believe that evil does not have the last word.