The Veil That Prevents Fundamentalists from Understanding the Bible
I regularly have Christian fundamentalists tell me that people who do not approach the Bible with faith cannot understand it. That is of course nonsense, although I am pretty sure that at some point in the past I believed it to be true. The first passage that is usually cited as "proof" of this point is 1 Corinthians 2:14: "The person without the Spirit does not accept the things that come from the Spirit of God but considers them foolishness, and cannot understand them because they are discerned only through the Spirit."But anyone who informs themselves about the meaning of the word Paul uses (translated as "discerned" in the NIV) will become aware that Paul's point here is not about one's ability to understand the Bible (and of course, Paul is not at any rate talking about "the Bible") but about accepting or embracing the message - not finding the words and grammar intelligible. 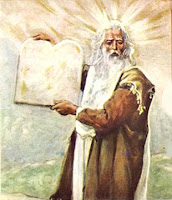 The other passage that tends to be referred to in this context is 2 Corinthians 3:15-16, which refers to people who have a veil over their hearts when "Moses" is read. There, if one reads the whole context, it becomes clear that what is being referred to is not a veil that prevents understanding, but a veil akin to the one placed over Moses' face in Exodus 34, which hid from view the fact that his face shone and that the glory with which it shone faded over time. And so Paul expressly says that the veil prevents some from recognizing that the glory of the old covenant, like the glory of Moses' face, is one that fades.

But this passage illustrates nicely why many fundamentalists do have a veil over their understanding which prevents them from understanding Scripture - which, ironically, prevents them from understanding in almost precisely the way that they claim others cannot understand! The veil is their lack of attention to the very things that convey meaning and make the text intelligible to anyone, religious believer or not, who sets their mind to understanding: the words, their meaning, and the grammar that connects them. Because such fundamentalists in fact treat the Bible carelessly and contemptuously, they do not take the time to realize that these passages say nothing about the intelligibility of the words of Scripture to those who are not believers.

Atomistic interpretation also is a factor. Quoting just a verse from 1 Corinthians and a couple of verses from 2 Corinthians, one can easily persuade oneself that the meaning is what fundamentalists claim. And so by treating the Bible as a collection of verses to be used independently of their context in the Bible, fundamentalists mistreat and disrespect the Bible and thus misunderstand it.