Why do I remain in the Church? When this question was posted to me, I was taken aback for a moment. When one endures, survives, ekes out an existence on the fringes for so long, the question of “why” often becomes moot. Why do soldiers survive in the mayhem of battle? Why do parents survive impossible situations, fueled on only by the thought of their children? Why do those struggling with terminal illness manage to hold on for double, triple, or quadruple their truncated lifespan?

The answer, put simply, is that they must. There is some intangible and ephemeral Promethean spark within their breast that defies all logic. In situations like those listed above, “why” is the wrong question to ask. Instead, one should ask “how” they choose to survive.

When faced with situations that overwhelm and devastate our human emotions, we switch on the autopilot of instinct. Instinct will help one to survive—survive, but not thrive. Instinct, albeit necessary at times, will carry one only so far.

In my own life, instinct—that raw, slashing need to live no matter the cost—helped to keep me a Christian for a time when all logic said I should have abandoned it. But in order to get to this point, some background must be filled in first.

Raised in a religious home—a Pharisee among Pharisees—the world was simple. Dichotomized. Lobotomized. All questions were easily answered as “righteous” or “profane” before the subject was changed and dinner was finished without further interruption. In my family, questions were not encouraged, so questions were not asked. Any doubt of a religious nature had to be “prayed through” and, if it lingered too long, your very faith was in question. You did not trust God enough to supply the answers (or you wanted your own wicked agenda so badly that you ignored what the Bible plainly said about it). If that situation seems slightly frightening, it is tame compared to the churches we attended.

One church in particular, High Praises—the very name brings bile to my mouth due to the mocking irony of such a name—was totalitarian at best. The “pastor” (who had absolutely NO theological training and was, in fact, a failed musician who used to play honky-tonk in bars until receiving his “calling”) was held up to be the “be all, end all” and ultimate guru for our lives. His word, coming directly from his coffee dates with the Lord Almighty, was without fault; anyone questioning him was questioning God.

Around the time that I started attending this church with my mother, I was at a crossroads in my life. I had recently outed myself as gay to all of my friends in high school and felt contented in who I was. In a perfect world, the story would end with the protagonist embracing his identity and his church, in turn, embracing him, demonstrating the love that Christ, in essence, is. However, this was not the case.

Remember, careful reader, that I had mentioned the type of home environment that I was reared in. Homosexuality was never discussed in my household. Due to this, and the fact that I never read my Bible, I believed that who I identified myself to be was fine by God. God had, in fact, made me and I was reared to believe that God didn’t make mistakes. Unfortunately, human beings do. 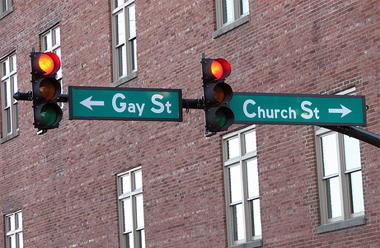 A series of events happened, leading me to believe that God hated me, and, consulting my Bible (which I was taught to read literally), I found it to be true. Thus began a five-year journey to try to change my sexual identity out of fear of eternal damnation, egged on by some of the voices in my church. My “pastor” (and I put this in quotes because I believe he is an outrage to such an esteemed title as shepherd), knowing of my struggles, publicly and vehemently condemned gays from his pulpit on at least three occasions, saying to the congregation that the gays “needed to get over themselves and hear God’s truth” as a way of excusing his hate speech. On another occasion during an altar call, he refused to pray for me unless I was “serious about changing,” since he had seen me come up several times that month and was thus far discouraged with the results.

Frustrated at his own inability to exorcise the demon of homosexuality from my spiritual body, he began to take out his anger on me in silent ways. For example, he denied me the right to sing on the praise team because he didn’t believe that someone who “struggled with the kind of things [I] struggled with should be in a position of spiritual leadership”. All of these events, while horrible, were forced under the rug, since I was trying to obey the man that I thought God had put in leadership over me. However, one final event broke that thin veneer.

When I decided to leave the church for reasons other than the aforementioned items, my mother and I both received phone calls. My mom got a call from the “pastor” complaining about our disloyalty, blaming me for problems in the youth group, and telling her how many people had left the church because he “supported” me. He asked that I give back a car that the church had traded me for, saying I was unworthy of such a gift, since I wouldn’t put it to proper use. My mother, taking this all in stride, told this so-called “pastor” that he needed to speak with me personally since I was an adult at the age of 18. He hung up the phone, and I waited anxiously for his call.

A few hours later, his wife calls me, and she proceeds to tell me that I am demon possessed, that I have spread “seeds of discord” among the youth, that I spread rumors about the “pastor,” and was to blame for the large number of people that were deciding to leave at that time. Then, while I was stunned and in tears, she had the gall to pray for me, and then, in essence, curse me by saying that I would never find a church that accepted me (and not because I struggled with being gay, oddly enough, although the implied meaning was clear).

After that, I went into survival mode. My church had been my world. The “pastor” and his wife had been my means of relating to God. My congregation was my family. And, in an instant, it was all ripped away from me. I was a spiritual infant, torn between two sides; he was Solomon, sharpening his sword to cut me in two, convinced of his own wisdom.

For the next few years, I was the Canaanite woman, begging for the scraps of my Master’s table, jumping from one church to the next, forever hounded by the “pastor’s” wife’s curse. Finally, I stopped running. I gave up on religion entirely. By this time, I had been “ex-gay” for five years and was beginning to have a mental breakdown. My body and my emotions told me that I was attracted to men. My mind told me that I should be attracted to women. I was pulled so hard by opposite factions that I eventually lay in tatters in between. For my mental health and sanity, I decided that I needed to give a gay relationship a try, and, since I was taught to believe that one couldn’t be gay and Christian, I had to say goodbye to Christ for a short time.

Of course, anyone who has been close to the Divine realizes that such an arrangement doesn’t work. The color drained out of my life; all the vibrancy was gone. I needed to be in relationship with Christ, or risk living a life without meaning. Around that time, God saw fit to bring my fiancé into my life, a man who had recently started searching through the fallacies of his own life to try and reconcile his faith and his sexuality. He encouraged me to ask the hard questions, and, by the grace of God, I did. I was through surviving. I wanted to thrive. I wanted to be the disciple whom Jesus loved, reclining my head on the heart of my Savior, and I wanted that Savior to love me as I was made. Thus began a slow and arduous journey to, once again, discover who I was as a person and who I was in Christ. There was no question that I was going to survive as a Christian—I had to. But I had to discover how to be satisfied and grow as a gay Christian and how to heal the wounds left in me by so many so-called religious people.

As I have journeyed, I have not done so alone. God has seen fit to surround me and my partner with a body of believers that is overflowing with the love of Christ—a body that is not afraid to ask the difficult questions. My quest is by no means finished, but the trip is easier with brothers and sisters that will help carry my burdens and encourage me when I fall down.

So why do I remain in an institution that has done irreparable damage to me—that has piled spiritual abuse upon my head and made me question my First Love? Simply put, I had to: there was never any choice. If God delights not in offerings but in a broken and contrite heart, then how much does he relish the offering of my shattered past? If Christian love covers over a multitude of sins, how much more so does Christ’s love blot out the sins of my oppressors? If Jesus truly did send another Comforter to us, how much closer am I to my God in my sorrow? Love always protects, always trusts, always hopes, always perseveres. Love never fails. This is why I endure. This is why I remain.