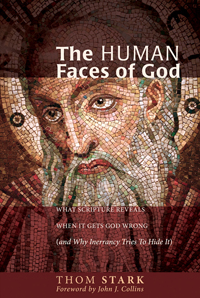 The Human Faces of God will shatter any honest reader’s preconceptions about the Bible and what it “says” and leave that reader with a stronger and better faith. This book is the most powerful antidote to fundamentalism that I’ve ever read. Literalism and fundamentalism have defamed God by defining God as someone or something as small-minded as God’s interpreters. This book liberates God at last.

If the truth should trump all, then this book should persuade those it argues against. It is informed, heart-felt, and utterly reasonable. Christians can ignore the facts that Stark brings into the light of day only if they want to be wrong.

The Human Faces of God is one of the most challenging and well-argued cases against the doctrine of biblical inerrancy I have ever read. The value of this bold and witty book goes well beyond posing challenges evangelicals like myself must face, however. All who hold the Bible in high regard will benefit from Stark’s brutally honest, insightful, and well-researched investigations into the text, as well as from his own constructive proposal to interpret Scripture’s “damnable texts” as “negative revelations.” Rarely have I read a book with which I agreed and disagreed so much—which is precisely why I found this stimulating work to be deeply rewarding and believe it is a work that deserves to be seriously wrestled with by evangelicals and mainstream Christians alike.

Here is a book that answered a lot of questions that I had about what really transpires historically as it pertains to the revelation of God in Scripture. I learned so much from this book that I can strongly encourage anyone who is seeking to move from simplistic proof-texting to a comprehensive understanding of the Bible to read this book carefully.

The battle over the Bible is increasingly polarized between the absolutism of inerrantists who claim to speak for all Christians and the scorn of secularists who find easy targets for ridicule. With an engaging combination of honesty, goodwill, and wit, Thom Stark offers a vital third way. He explodes the “hermeneutics of convenience” of self-styled inerrantists, examines some of the most objectionable aspects of the Bible, and refuses throughout to sacrifice moral decency on the altar of inerrantist dogma—which is, after all, as much a human construction as the biblical criticism that inerrantists deride. This is must reading for Christians who have agonized over their own private doubts about Scripture—and for others who have given up hope that evangelical Christians can practice intelligent, moral interpretation of the Bible.

Thom Stark writes with intense passion and an almost brutal honesty. In doing so, he does thoughtful Christians a great service. In our chaotic, post-Christendom age, the teachings of the Bible are more relevant than ever—should we fight our way free from old patterns that make a doctrine about the Bible more important than the Bible’s content. We need passion and honesty like Stark’s to overcome the problems of an authoritarian theology of the Bible. And then, with the help of this book, we may discover that the Bible—when we read it in all its diversity and vulnerability—does bring healing words to those who keep listening.

Thom Stark’s book The Human Faces of God reflects an engagement with Scripture and a personal journey of faith that mirrors my own, and that of many others in our time who have found themselves grasped simultaneously by both a positive experience of and personal adherence to the Christian faith, and the conviction that the Bible does not fit the descriptions that conservatives and fundamentalists use to describe it, such as “inerrant.” Stark’s book offers a refreshingly honest engagement with Scripture as Scripture, acknowledging the bad as well as the good within the pages of the Bible, and explaining what the positive function of the Bible can be when read in this honest and critical fashion.

What the reader is offered on its pages is neither an attempt to defend the Bible from criticism for the sake of maintaining a worldview, nor an attack from without, but criticism of the Bible from a Christian perspective. Perhaps most importantly, The Human Faces of God highlights aspects of the Bible ignored or denied by the superficial reading of those who ironically proclaim themselves the Bible’s defenders. Stark’s book effectively demonstrates how the Bible, in practice, is the most dangerous enemy of fundamentalists, who regularly seek to defend their doctrine and idea of Scripture from the evidence found in the Bible itself.

I strongly recommend The Human Faces of God, and look forward to the conversations and growth towards maturity that I expect will be the experience of Christians who read it and engage with it as individuals and as communities.

For a few centuries now, conservative Protestants have been uncomfortable with the humanity of Jesus and the Bible. But momentum is building in new directions—a theological genre is appearing that is wholly comfortable with God’s choice to redeem his fallen world through the finite and fallen horizon that stands in need of redemption. I welcome Thom Stark’s contribution to the genre. May it advance us towards a healthier understanding of Scripture and of the Savior to which it points.

More than just the standard retelling of the horrors of the Bible, Stark’s “confrontational” method of reading scripture exposes the deadly contradictions of biblical fundamentalism and gives thoughtful Christians a way forward by allowing them to “own” these troubling texts in a new way. Readers will breathe a deep sigh of relief at his suggestion that we can view the “dark side” of the Bible as scripture precisely through our condemnation of the way it too often portrays the character of God and the things that God calls human beings to do to one another. Perhaps most importantly, Stark provides a model for theology that is committed to hearing the voice of the victims of history, especially the victims of our own religious traditions. A powerful book.

Each chapter of The Human Faces of God is packed with information and draws one in deeper like a good crime novel. Unlike conservative Evangelical fare that confuses biblical scholarship with the practice of apologetics, Thom Stark has learned the difference. Apologetics relies on bits and pieces of biblical scholarship, any that can be used to support its preconceived notion that the Bible’s unity is crystal clear and each book is unquestionably without error. But the questions are there, they’ve always been there, and with precision, wit, and passion, Stark guides the reader through some of the most challenging ones.

This book is for those who wish to understand the Bible and learn from it. It is not for those who seek handy Bible quotes, nor for those who have no urge to plumb the Bible’s depths. Thom Stark shows how the scriptures confront us with the big questions such as suffering and identity. He provides a thorough and devastating critique of the “inerrancy of scripture.” He offers persuasive rejoinders to those who try to get round some of the nasty bits of the Bible or dodge difficulties like the possibility that Jesus was wrong. If nothing in this challenging book causes you to think again, you have a very closed mind!

Stark’s book is a direct frontal assault against evangelical Christianity, the exact likes of which I have not seen before in one volume. In it Stark exposes, in the words of Mark Noll, the “scandal of the evangelical mind.” While Noll was chiding evangelicals for not producing the best and brightest thinkers capable of truly engaging and changing their society for Christ, the reality is that the real scandal is evangelicalism itself. The best and brightest thinkers, like Stark, cannot remain evangelicals once they truly become biblically informed. I can only hope his book will have a very wide readership within those same circles.

John W. Loftus
Founder of the website Debunking Christianity
Author of Why I Became an Atheist

The Human Faces of God reads like a guidebook to the Bible’s most troubling passages, and Thom Stark our guide on this tour is not afraid to ask difficult questions of the texts. Though one may not agree with him at every turn, Stark’s work is a bold and much-needed call to deeper reflection on the nature of Christian scripture and its place within the shared life of God’s people.