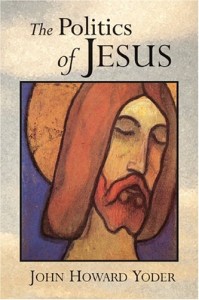 So, I’m neck-deep in dissertation stuff. This is my life right now, besides grading papers. I’m taking notes for chapter 3, trying to sort John Howard Yoder’s The Politics of Jesus into the five principle topoi around which I’m organizing the dissertation: ethics, ecclesiology, eschatology, etiology, and economics. Yes, they all begin with ‘e’; that’s part accident, part serendipity, and part homage to Catherine Albinese’s four C’s of religious studies — creed, code, cultus, and community — only mine are designed to get at the overlap of religion and politics in specific ways. When I landed on that rubric I began to feel like I might actually have something to say.

Yoder is great for this because he basically connects all those dots for me in his own work (in fact, I’m seeing ways in which my approach to this study — I’m examining the relationship between religion and politics in the postsecular turn through the lens of Christian radicalism, particularly the anarchist implications of a pacifist ethics — has been shaped by my appreciation of Yoder). His pacifist ethics is made intelligible by his eschatology, and he knows this. His ecclesiology is the sociopolitical expression of this ethics as a sign, a foretaste, and a herald of what is to come. The church is to live out a kingdom ethics in the here and now that will be for the whole world in the time to come. This ethics has a strongly economic component inasmuch as it is also a Jubilee ethics, where debts are forgiven and slaves set free, and Yoder’s clearest expression of this is in his 1972 The Politics of Jesus, which is an etiological project in the exact sense that I am using the word.

The church can afford to be pacifist, in Yoder’s theology, because the church is not charged with the task of setting things right. This will happen by the hand of God at some later date. Yoder is correct to point out (decades ahead of people like N.T. Wright) that the horizon of expectation, for Jesus and his followers, was not some other-worldly realm but God’s action in this one, a time when God would break into history and settle the score. Justice is deferred eschatologically such that those times that turning the other cheek just gets you slapped again and the path of self-giving love leads to crucifixion are redeemed at some future date when all is revealed.

For Jesus and his followers, this meant judgment upon Israel’s enemies (Rome in particular) and the vindication of the martyrs. The book of Revelation makes little sense without this assumption. They thought it was coming soon, within a generation, and while Yoder explicitly rejects a hermeneutic in which Jesus’ ethical call is intelligible precisely because this was seen as so close (and because the imperial power of Rome disallowed violent resistance as a live option) he does so simply by extending the deferral period indefinitely. God, apparently, is a perpetual grad student who keeps taking classes to avoid paying back his loans.

For a time, I was able to crib a page from the eschatological playbook of my Transmillennial friends, one that says everything’s already fulfilled, and read Yoder through that lens. It takes the apocalyptic bookend off one end of the shelf. In such a mashup, then, this is it; the church’s nomadic journey in resistance to the powers has been concretized as the very way of Jesus. God has effectively pronounced that there is no reckoning, no guarantee, no promise that everything’s going to be okay. This, take it or leave it, is the world created and called “good,” and while we’re welcome — perhaps even called — to contribute to the commongood, there is no grand design or plan to make everything correspond to our idea of perfect.

In this theology, one embraces the kenotic, pacifistic way of Jesus not because everything’s going to Come Out Okay in the End, but simply because it’s The Right Thing to Do. This is what it means to follow Jesus. This is the way of the Cross. I lay down my claims to power, or defense, or vengeance, not secure in the belief that God is going to justify my stance in some tangible way but simply because that is my calling, regardless of what God does or doesn’t do.

It’s a kind of poststructuralist version of the Calvinist who insists they would praise God even if they were one of the damned. Embracing such a call is what it means to believe in the Resurrection, which becomes, in my way of thinking, less a metaphysical claim about what once happened to some dead guy and more a way of narrating the rightness of the path of the Cross. There’s a lot I like about that.

But that center did not hold. Pacifism became the hammer that let me see the whole world as a nail. It quickly became an absolute, an ethical position that takes on all comers. It became a way to win, a way to embrace my skepticism while still being more right than all those other bastards who piss me off by being so right. It was my own secret gnosis, the key to everything, the one ring to rule them all. In the end, it had to be crucified. If following Jesus means anything, it means I don’t get to decide what following Jesus is supposed to look like.

I haven’t started packing heat or anything. I’m probably 99% pacifist; I just don’t want to foreclose on that 1%. It’s not because I’d cave under the carefully constructed hypothetical scenarios that opponents of pacifism like to toss at pacifists. Sure, under the right conditions, I’d probably put a cap in somebody’s ass (but I’m not buying a Glock on the off chance that such a condition will arise). That’s not a good reason to not be a pacifist any more than the fact that I can think of situations I might lie is a good reason to give up on honesty.

No, it’s more that pacifism as an absolute isn’t really pacifism. An absolute ethical stance is inevitably an ethical shortcut that presumes to know in advance the answer to a call that hasn’t come yet. I’m all about preaching pacifism to the privileged; I’m a lot less comfortable preaching it to the oppressed. Not that I’m trafficking with the oppressed a whole lot, mind you. I’m not. And not that violence is very often a clear and present option for anyone, let alone the oppressed. I just can’t, as easily as Yoder, dismiss the idea of the strong having responsibility for the weak, up to and including using force in defense of the weak, mostly because I don’t share Yoder’s metaphysical commitments.

In not believing that God is coming over the next hill to save our sorry asses, I disabuse myself of the luxury of a pacifist ethics. The grand reckoning that Jesus and Paul associated with the apocalypse never happened, and I don’t have the metaphysical apparatus to either believe everything was really fulfilled in some way that we can’t fully understand or that it is going to be fulfilled at some point in the indeterminate future. But I can still read this as revelatory, as apocalyptic in the sense of an unveiling; it reveals our freedom, our stark, naked, terrifying freedom. The freedom to which Sartre said we were condemned. We are free from any and all apocalyptic scripts. Free from ethical absolutes — which does not so much free us from the ethical call as it throws us ever more deeply into that call.

This is our salvation.