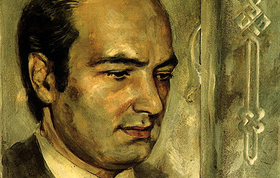 Ideal man passes through the very midst of nature and comes to understand God; he seeks out mankind and thus attains God. He does not bypass nature and turn his back on mankind. He holds the sword of Caesar in his hand and he has the heart of Jesus in his breast. He thinks with the mind of Socrates and loves God with the heart of Hallaj. As Alexis Carrel desired, he is a man who understands the beauty of science and the beauty of God; he listens to the words of Pascal and the words of Descartes.

Like the Buddha, he is delivered from the dungeon of pleasure-seeking and egoism; like Lao Tse, he reflects on the profundity of his primordial nature; and like Confucius, he meditates on the fate of society.

Like Spartacus, he is a rebel against slaveowners, and like Abu Dharr, he scatters the seed for the revolution of the hungry.

Like Jesus, he bears a message of love and reconciliation, and like Moses, he is the messenger of jihad and deliverance.

He is a man whom philosophical thought does not make inattentive to the fate of mankind, and whose involvement in politics does not lead to demagoguery and fame-seeking. Science has not deprived him of the taste of faith, and faith has not paralyzed his power of thought and logical deduction. Piety has not made of him a harmless ascetic, and activism and commitment have not stained his hands with immorality. He is a man of jihad and ijtihad, of poetry and the sword, of solitude and commitment, of emotion and genius, of strength and love, of faith and knowledge. He is a man uniting all the dimensions of true humanity. He is a man whom life has not made a one-dimensional, fractured and defeated creature, alienated from his own self. Through servitude to God, he has delivered himself from servitude to things and to people, and his submission to the absolute will of God has summoned him to rebellion against all forms of compulsion. He is a man who has dissolved his transient individuality in the eternal identity of the human race, who through the negation of self becomes everlasting.