Somebody asked me today, “What are we exactly saved from and what does the death and resurrection of Jesus mean in relationship to that?” This is a significant question. Evangelicalism preaches that you need to “get saved from your sins!” By this, Evangelicals typically mean that we need to enter into a personal relationship with Jesus in order not to have to go to hell as a result of our (individual) sins–sins like adultery, lying, fornicating, or the biggest sin of all: not being an Evangelical.

But that’s not what “being saved” or “sin” generally meant in the New Testament. A biblical understanding of these themes would run (just on a cursory level) something like this: The primary sins of Israel were idolatry and systemic injustice. These are the two things that the prophets preached against, time and time again. The punishment for these sins was eventually, exile, and Jesus came onto the scene at a time when Jews were still in a very real way in exile, even though they lived on their own land. They were still under the category of “exile” because they were under the hegemony of foreign powers (in Jesus’ time, Rome). The concept of “forgiveness of sins” in this period, and in the NT, is not primarily about the forgiveness of individual sins (although it includes that), but “the forgiveness of sins” refers specifically to the restoration of Israel in two ways: (1) to internal structures of justice, and (2) to hegemony over the other nations–to its “rightful place” of prominence. Jesus’ ministry needs to be understood as the proclamation of the forgiveness of sins in both of these two ways. Jesus opposed the systemic injustice within Israel and called for a radical reorientation of the politics and economics governing the people of God. The politics of exploitation governed Israel, from Rome, through their puppet temple regime, down to the retainers who did all the dirty work. The masses of Israelites were taxed by three sources: Rome, Herod1 and the (Roman approved) temple, so that anywhere between 60-80% of their income was taken from them each year. This left them with not enough to live on, so they would take loans from moneylenders. The moneylenders would then strip them of everything they had when they couldn’t afford to pay back their loans. Land was expropriated from the people and then, in poverty, they were paid meager wages to come back and work on the land they used to own. This is the context into which Jesus came up.

It also needs to be remembered that Jesus was from Galilee, not Judea, and Galileans had a fundamentally different way of looking at the religion coming from Jerusalem. They looked at it with suspicion and hostility, to say the least. So Jesus comes on the scene preaching the year of Jubilee (Luke 4) when all debts are forgiven. He gives the poor masses strategies for resistance (share, don’t hoard) and strategies for exposing the injustice of their oppressors nonviolently. For instance, if someone, namely a moneylender, sues you for your cloak in a public court (which is what they did as a surety when a debtor couldn’t pay back a debt), Jesus says, “give them your tunic as well.” In other words, strip down naked in public, give them everything! This was a nonviolent protest, exposing the exploitative nature of the economic system.

Jesus was thus heavily involved in the political and economic policies of his world, and he was a resistance leader against the structures of exploitation. He was, in other words, a prophet preaching covenant renewal, which is that first ingredient in the “forgiveness of sins.” He also preached the coming of the Son of Man in judgment against the nations, and the unfaithful (exploitative elites) of Israel (the elites being an extension of Rome, rather than authentic Jews). This was the second ingredient—the deliverance of Israel from foreign hegemony and its restoration to a place of prominence among the nations. Jesus believed this final judgment was imminent (he said it would happen before all of his disciples died off). 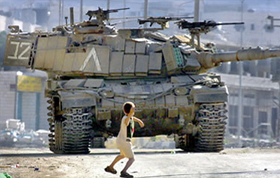 Jesus therefore opposed the temple regime in Jerusalem. They, as Roman puppets, had a vested interest in preserving the status quo. Jesus was their enemy, and they were his. He preached judgment against the temple, correctly predicting its destruction, and claiming for himself and for his followers the authority to forgive sins. This wasn’t a claim to divinity as we often hear. What it was was a direct threat to the temple, saying that God was no longer operating through the temple regime because they were corrupt. God was now moving through the Jesus movement, and that’s where “forgiveness of sins” would come from. So when Jesus went around forgiving the sins of various people, those were microcosmic signs of the fact that the great big “forgiveness of sins” (those two things we talked about: internal justice and liberation from exile) was about to happen, and that it would happen through this Jesus movement. Jesus was crucified because he represented a real political threat to the authority of the temple, and therefore a threat to Rome—because Rome used the temple as a way of keeping that region of their empire pacified. The meaning of the crucifixion is that Jesus opposed the powers that be and so they killed him for it. The resurrection suggests that the powers that be did not win. God will have the final say, and God vindicates Jesus from the shame of defeat by Rome in order to show that ultimately Rome will be defeated by God’s Righteous One (the true Lord and King, over against Caesar) Jesus. As a result of this ultimate triumph of God’s faithful (read: socially just) people over the exploitative elite Jews and foreign power, the world would be fundamentally reordered (a recurring theme throughout the Bible of God combating chaos and bringing order) and peace and justice would reign on earth forever. That is the New Testament message of “salvation from sin” and the significance of the cross and resurrection within that matrix of thought.

So the next time some Evangelical tells you that you need to get saved from sin, tell them that you are looking forward, in fact, to getting saved, very soon, from the Evangelical churches’ systemic injustice and from the consequences of their idolatrous affection for Western imperialism. Tell them you hope they’re able to be saved on that day too!

One thought on “On Getting Saved”