In his seminal volume, Jesus of Nazareth: Millenarian Prophet, Dale C. Allison argues (as I have here and here) that Jesus was an apocalyptic prophet who believed that a final judgment of humankind and a total reordering of the cosmos was imminent (that is, that it would happen within his lifetime or shortly thereafter). Millenarianism “is the belief by a religious, social, or political group or movement in a coming major transformation of society, after which all things will be changed. . . . Millenarian groups claim that the current society and its rulers are corrupt, unjust, or otherwise wrong. They therefore believe they will be destroyed soon by a powerful force. The harmful nature of the status quo is always considered intractable without the anticipated dramatic change.” 1 Millenarianism is not something that is unique to the Judeo-Christian tradition. Although it appears frequently in Western nations such as we see in dispensational premillennial cults, the early Jehovah’s Witnesses, the Millerites, etc., it is also found all over the world, historically and geographically, in many cases in places that have had no contact whatsoever with Judaism or Christianity. Millenarianism has been found among the Guarani of Brazil, among the Ceylonese, among Buddhists in Thailand, Japan, Vietnam and Korea, in some Islamic groups, in Judaism prior to the time of Christ, and in numerous other places.

A frequently common feature of millenarian groups is messianism, the belief in the coming of a powerful figure or a god who will instigate or impose the catastrophic transformation of society or the cosmos. Weston La Barre comments:

It is fatuously and absurdly ethnocentric to suppose that every native messiah is necessarily patterned on a European Christ, since many native messiahs have never heard of Jesus. The fact is not so much that all native messiahs derive historically from the only genuine Messiah as that Christ is an example of a very common figure in the world’s cultures.2

Rather than attributing the commonalities of millenarian groups to the influence of one group upon others (a common claim among Christians of an apologetic bent, which the evidence matter-of-factly refutes), Allison suggests that “human psychology is such that the same convictions sometimes crop up independently in different cultures.”3 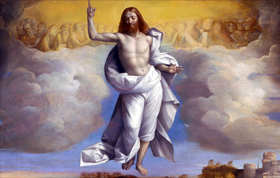 These features are shared in common by millenarian groups across continents and throughout epochs. What does this tell us? That there is an apocalyptic shaped whole in every oppressed group’s heart? I suppose some Christians could read this and decide that the fact that these features occur all over the world just verifies the particularity of the first century Christian version. They are the imperfect types to the antitype of the Jesus movement. C.S. Lewis would probably go that route, and that is one possibility. What is another possibility? What might it say, for instance, about the Jesus movement itself? Understood in sociological terms, is there anything surprising about the beliefs of these first century followers of the peasant from Nazareth? What might this suggest about the normativity of an apocalyptic paradigm for Christian doctrine and practice? Are we any more justified calling, Maranatha–our Lord, come–than the Korean Buddhist who awaits the arrival of Maitreya? If we believe they are deluded for waiting for Maitreya, what makes our hope any less so? Is it better to have waited for Godot and to have lost, than never to have waited at all?