Evangelicalism and the Others of Invention 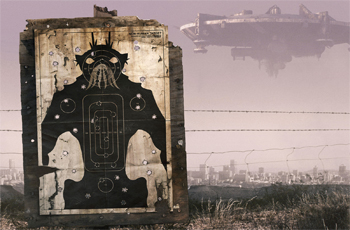 Until District 9, aliens were the ultimate “Other.” It’s not that D9 is the first film ever to portray aliens sympathetically, or that there aren’t other sci-fi efforts with complex treatments, but it is certainly one of few films in which the very kind of alien that would ordinarily be the Ultimate Bad Guy — creepy, slimy, insectoid or reptilian, utterly non-human yet eerily familiar — is significantly outside that role. Think of the iconic antagonist in Alien, for example — or Independence Day, in which the aliens in question possess qualities we are rightfully uneasy about in late capitalism: a megalomaniacal quest for expansion, an insatiable and destructive appetite for resources, the tendency to objectify life itself as one of those resources. We have met the enemy in Independence Day, and they are us — only slimy and gross and utterly irredeemable. The link between xenophobia and projection is like low-hanging fruit, ripe for film studies class.

For the most part, there aren’t interest groups that will protest the portrayal of space aliens in commercial film (okay, Rule 34 suggests there’s probably a porn site, but let’s stay on topic). Ridley Scott’s extraterrestrial badass is something we can hate with impunity. Ditto the enemies in ID4. We are invited to share Will Smith’s revulsion at the sight and smell of these strange beings, to reel in horror at the carnage wrought in the lab scene and the audacity of the alien agenda revealed there, and rally around the president’s big speech before battle (based loosely on the St. Crispin’s Day speech in Henry V, for you lit geeks) in rooting for salvation of the planet through redemptive violence.

District 9, on the other hand, works by denying us the usual pleasure of desiring the destruction of an utterly contemptible enemy. If it’s passé to suggest that we derive our sense of identity, or at least part of it, by defining ourselves against an “Other” of our own invention, it’s still true. While of course genuine differences exist, difference itself does not account for our tendency to cast others as the ground against which the figure of our own identity can make sense to us. If we’re uneasy about ourselves, we can always point to some “Other” and say: at least we’re not those people. If projection is at work, and it often is, we can also find in the Other a distilled version of aspects of ourselves we don’t like, and distance ourselves from those aspects in the process of “othering.” It is the rhetorical equivalent of scapegoating.

And this would seem to be built into our cultural DNA. We can’t stop. We’re addicted. Othering is almost the sine qua non of Western identity construction. The connection to scapegoating goes way back, as Rene Girard’s work on violence and religion suggests, but the proximate source of our othering addiction is the legacy of Christendom.

In the rhetoric of the Pauline literature, the primary dichotomy seems to be church and world, with guards against applying this dichotomy directly to persons, especially as a justification for violence (“we wage not against flesh and blood, but against principalities and powers”). In other places the language is less careful, but early Christianity at its best worked by foreclosing on the othering projects of the dominant forms of discourse; the usual “others” — especially Gentiles, women, and slaves — were welcomed and even sought after, and the usual dichotomies were re-drawn in favor of the church/world distinction. Violence looms in the background, however, as they expected the world to pass away and the church to claim ascendancy in an apocalyptic conflagration.

What actually happened, of course, is not conflagration but conflation; church and world became one. The wedding of earthly power and spiritual authority was well underway before the conversion of Constantine, and helped to make the phenomenon of Constantine as a Christian emperor possible in the first place, but it seems hardly coincidental that the acquisition of greater power is roughly coterminous with ever more vigilant and violent efforts to root out false teaching. In the same century we have Constantine, Nicea, at least one of the efforts at ratifying a canon, and the declaration by Theodosius of Christianity as the official imperial religion. Heretics were the new Other, the scapegoat that had to be sacrificed in order to secure unity and peace in this next phase of Christian history. At the risk of cavalierly glossing over things like the fall of Rome and the development of monasticism (among other things), we can see a similar pattern in medieval Europe; the Crusades and the Inquisition are ways in which a budding Christian civilization is galvanized against perceived threats, both inside and out.

Because it is very difficult, if not impossible, for us to truly rise above this dynamic, it is not terribly surprising (despite how disappointing it might be) that issues like same-sex marriage and the ordination of gay clergy are hotly contested in evangelicalism, and that there is a lot of vitriol from conservative circles about it. The LGBT community are among our significant Others (pun intended) right now, and there are large chunks of evangelicalism with a stake in maintaining that relationship.

This is not unique to evangelicalism, of course, but there is an additional legacy that complicates matters: the logic of conversion. In conventional evangelicalism conversion places ultimate value on the immortal soul and the soul’s postmortem destination. The desire to save souls is earnest but it blinds the religious subject to the embedded, sublimated violence of the conversion process: the unbeliever is ultimately acceptable only if he or she becomes like the subject, at least in that area of life that the subject considers most definitive for identity. (This is not exclusive to conservatives; there are many liberals who seem to think that conservatives would be okay if only they were more like liberals.)

The other prong to this rhetorical violence is that it allows a screen by which prejudice based on race, class, gender, or sexual orientation can be maintained precisely because it does not interfere with the more important work of saving souls. In the antebellum South, slaves could embrace the Gospel as long as they knew their place (and in fact conversion, with its emphasis on submission in the name of Christ, was seen as an opportunity for domestication). Even today there are places where women are welcomed into the church as saved souls but not into the decision making processes that remain the purview of men. It is a pseudo-gnosticism that allows us to consider the soul separately from the dignity of personhood.

One significant difference is that there is no “place” for the homosexual Other in evangelicalism, except the closet. Women in patriarchal society are not required to become men; in fact, they are encouraged to perform their gender in particular ways that actually maintain them as the exotic, enticing, and dangerous (but tamed) Other. People who are gay, lesbian, bisexual, or transgender, however, upset the gender binary itself. They almost literally do not “fit.” They are placeless, semiotically and thus religiously homeless. In the most virulent circles, desire that falls outside of heteronormativity must be exorcised; in more moderate milieux it must be sublimated into a call to celibacy.

This othering process is always justified by holy writ. When women and people of color were the Other (and they still are in some places), there was no shortage of scriptural justification for this process. While it may not seem like an apples to apples comparison — clearly there are differences (there always are) — the structure of exclusion is the same. Scripture can be used to justify patriarchy, slavery, and heteronormativity, and it will be used to justify the next othering project to come down the pike, ad infinitum. If we claim that we have a biblical mandate to draw the semiotic boundaries where we have, we must at least acknowledge that previous generations did the same thing, justifying things that we no longer agree with. The line is always real, but it keeps moving.

There is a kind of good news here: the fact that such justification is even sought, the very existence of dialog, debate, and diatribe on this issue means that the othering of homosexuals is coming to the surface (coming out, as it were), becoming dislodged from the semiotic strata that once made it invisible. This happens whenever the Other is in the process of being incorporated into mainstream identity. Othering enters the discourse in an overt way as an overture to the step of assimilation or synthesis.

I am reminded of a time teaching at an evangelical college when one of my students blurted out: “That’s gay.”

“Please,” I said, “let’s not use the word ‘gay’ as a pejorative.” (I think I had to explain what “pejorative” meant, but that’s beside the point.)

Assimilation has its own dangers, however. It ignores the possibility that those who were once Other are simply being incorporated into a structure dedicated to the exclusion of the next Other. It also allows the othering process to continue in more subtle ways. In Independence Day, for instance, humans of all colors and nationalities (led by Americans, of course) are united against a common foe, but it is men who save the world (and the real hero is a middle-aged, alcoholic white guy who makes the “ultimate sacrifice,” but let’s leave that one alone) while the women wait at home to greet the victors. And we even get a little bit of the “magic negro” trope as Will Smith’s character shows Jeff Goldblum’s character how to be cool as they save the world.

There are millions of well-meaning people for whom this is terribly uncomfortable. They cannot see the structures that determine their boundaries for them, or at least they can’t see beyond those structures. They feel limited in their options for loving their neighbor when that neighbor is gay, lesbian, bisexual, or transgender. We need patience, and humility — even sympathy.

We also need local bodies willing to embrace the early Christian ethos and reach out to those othered by the dominant forms of discourse, and this means reaching out the LGBT community without the presumption that they will be okay if they become something else. And we need communities willing to at least not try to establish ahead of time how they will respond to the Other in their midst. They might find that bumper-sticker theology seems a lot less profound when they discover that “Adam and Steve” are already coming to church and want to be baptized.